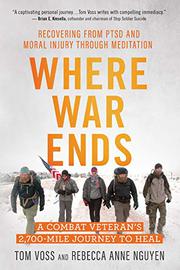 In this memoir, debut author Voss and freelance writer Nguyen (175 Ways to Travel Today, 2014) tell the story of Voss’ epic journey to combat his PTSD.

In 2004, Voss was a scout attached to a Stryker infantry brigade, participating in hundreds of combat missions, security patrols, and other duties across Iraq. When he came home to Milwaukee after his 2006 honorable discharge, however, he was plagued by feelings of grief, shame, and guilt regarding things that he’d seen in the war zone, including the deaths of close friends. Then, in 2013, he received an invitation to visit a friend in California, 2,700 miles away, and he decided to do it in an unexpected way—on foot: “No cars, no support vehicles, no rides from anyone. Just my two feet, the open road, and the ghosts of the past who demanded to be dealt with.” A friend and fellow vet, Anthony Anderson, accompanied him, and for both men, the trip became a surprisingly proactive approach to dealing with trauma. As Voss made his way across the West, he encountered a variety of characters—including a filmmaker who occasionally documented the walk; a Native American healer, known as WolfWalker; and veterans of different generations and wars. Along the way, he somewhat unexpectedly found comfort in meditation. The authors tell Voss’ story in clear, conversational prose, as if Voss were casually speaking across a dinner table: “In Iowa we’d met a marine-turned-rancher-turned-pastor who told us that life demands a response. You can respond to trauma by curling in on yourself like a wilting plant, or you can respond by taking action to face the pain and move through it. That sounded good, but I was taking action.” Overall, the book is an engaging mix of war story, travelogue, and motivational memoir, presenting the trials of a man with roiling emotions but no clear method of releasing them. As the journey goes on, his book becomes an unlikely look at the pain of everyday people in contemporary America, and particularly that of forgotten soldiers of forgotten wars.

An offbeat and inspiring tale of a vet trying to find a way to help himself.