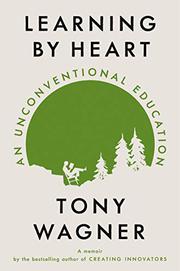 An educator recalls his struggle to define true learning.

In a candid, often bitter memoir, Wagner (Creating Innovators: The Making of Young People Who Will Change the World, 2012, etc.), a senior research fellow at the Learning Policy Institute and former high school teacher, principal, and professor of teacher education, offers a harsh critique of schooling—traditional and nontraditional—that he claims quashes students’ love of learning. Most of his schooling was stultifying: He felt like an “outlier” at the small, coeducational, private elementary school that he attended; an all-boys middle school was worse. Disaffected and defiant, he earned such bad grades that he was not invited back for high school. Instead, his parents sent him to a boarding school where one frustrated teacher shouted at him, “you’re always gonna be a fuckup,” an admonition that haunted him throughout his life. Wagner’s demanding, unsympathetic parents tried yet another school—“a ‘last chance’ school,” he soon discovered—where a kind English teacher encouraged his creative writing ability. Overall, though, his teachers were unable “to help me make sense of myself and the world around me.” After dropping out of two colleges, Wagner found the Friends World Institute, which allowed students to travel the world to study social issues. That pedagogy reminded him of Summerhill, an experimental learning environment where children followed their interests without restrictive requirements or formal classes. Friends World endorsed Wagner’s independent program to examine education that “supported individual’s strivings for growth and self-development.” The author reached the epiphany that “having an interest wasn’t enough. You also have to develop the muscles of self-discipline and concentration needed to pursue your interest and deepen your knowledge and understanding.” Graduate study proved as disappointing as earlier educational experiences, and he deems the classes he took at the Harvard Graduate School of Education “a complete waste of time.” As a teacher and administrator, despite his good intentions, Wagner suffered failures, which he blames on overconfidence and teacher resistance; eventually, he joined and led several educational reform projects.

A combative tone informs a forthright argument for the importance of sparking students’ motivation.

MOST LIKELY TO SUCCEED
by Tony Wagner
Nonfiction