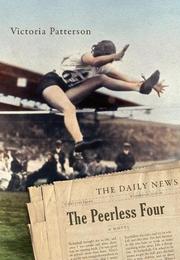 A middle-aged narrator forced to give up her own athletic dreams becomes surrogate mother to four girls heading for the 1928 Olympics in Patterson’s latest (This Vacant Paradise, 2011, etc.).

The Amsterdam games in 1928 were the first to allow women to compete, and a patronizing, blatantly misogynic editorial in the Toronto Daily Star (“No female should be seen swaggering around pretending to be male”) makes it clear that plenty of people still think it’s a terrible idea. Narrator Mel Ross, the girls’ chaperone, knows this prejudice intimately; as a young married woman, she was ordered to give up running, blamed as the cause of her miscarriages. Recruited by hard-drinking Jack Grapes to chaperone the female Canadian track team he’s assembled, Mel observes the external and internal battles her charges—dubbed “the Peerless Four” by the press—must wage to compete. Bold, reckless Flo pulls a muscle while racing a boy for fun and blows the 800-meter final. Anxious, desperate-to-win Bonnie, enmeshed in an affair with her coach, is disqualified after two false starts. Pretty, aloof Ginger effortlessly wins the high jump, but all the media fuss about her as the team’s “Dream Girl” alienates her from the sport she once loved. Only calm, stable Farmer, who wins the javelin toss, knows exactly who she is and what she wants. Mel herself isn’t sure until the end of the novel, which is as much about her evolving relationships with Jack and with her husband as it is about the girls. Mel’s narration has a meditative, often melancholy tone that’s slightly odd in a sports story, but this is not a rah-rah tale of women triumphing against the odds. Quietly scathing about the outrageous treatment of female athletes, the novel also shows the toll that competitive pressure takes on a quiet, shy male runner. Surviving, Patterson suggests, is more important than winning.

Elegantly written, though a little low on narrative energy.

THE SECRET HABIT OF SORROW
by Victoria Patterson
Fiction

THE LITTLE BROTHER
by Victoria Patterson

NIKE IS A GODDESS
by Lissa Smith
Fiction