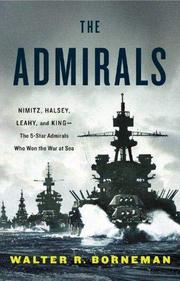 The author chose his subjects—Chester Nimitz, William Halsey, William Leahy and Ernest King—because they were the first and only five-star fleet admirals, when five stars were first authorized by Congress in 1944. The four were key to rebuilding the fleet after the debacle of Pearl Harbor: Leahy, the oldest of the Annapolis grads, already a proponent of building up the interwar gunnery as commander of destroyers, was the first to earn an admiral stripe, an early advocate of the “big ship-big gun” strategy; King, formerly head of the postgraduate Naval School, a steely, volatile leader, was appointed commander in chief of the U.S. Fleet after the Japanese attack, eventually muscling out co-consul “Betty” Stark and demonstrating astute strategic insight in dividing command between the North Atlantic and Pacific; Nimitz, who cut his teeth on submarines, was the consummate commander, ferociously exacting but devoted to his men, appointed commander in chief of the Pacific Fleet and proved bold and decisive from one Pacific strike to another; and “Bull” Halsey, a scrappy fighter, commander of destroyers, lauded for his “can-do” leadership in the Solomons—though he endured questioning over his handling of the attack at Leyte in 1944. Borneman deftly manipulates multiple narrative strands and a wealth of detail. He vividly fleshes out the numerous vain, ambitious men vying for power at the top and examines their important decisions and lasting ramifications.

THE FRENCH AND INDIAN WAR
by Walter R. Borneman
Nonfiction

Showdown in the Pacific War
by Ronald E. Martell
Nonfiction

THE BATTLE OF LEYTE GULF
by Thomas J. Cutler
Nonfiction

MACARTHUR
by Richard B. Frank
Nonfiction

THE COLOR OF WAR
by James Campbell
Newsletter sign-up