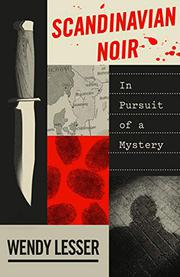 In Pursuit of a Mystery
by Wendy Lesser
BUY NOW FROM
AMAZON
BARNES & NOBLE
LOCAL BOOKSELLER
GET WEEKLY BOOK RECOMMENDATIONS:

An enthusiastic guide to the mysteries and the countries.

Threepenny Review founder Lesser, whose biography of Louis Kahn, You Say to Brick (2017), won multiple awards, has been a huge fan of Scandinavian mysteries since college. She shares her “eccentric and personal” excitement for them in this comprehensive and insightful assessment of noir novels from Sweden, Norway, and Denmark. “What I have constructed here,” she writes, “is a map, or a portrait, or a cultural history of a place that both exists and does not exist.” Early on, Lesser shares how the ten-book series about Swedish homicide detective Martin Beck, written together in alternating chapters by Maj Sjöwall and Per Wahlöö, “changed my life.” Beck’s friend Lennart Kollberg is “one of the great characters of detective fiction.” In Lesser’s opinion, the only series that approaches Beck’s in its “persuasively real experience” is Henning Mankell’s Kurt Wallander series. The author found Stieg Larsson’s uber-popular Lisbeth Salander series “un-putdownable” even though she “despised the cheap feminism of the books.” In the first section, Lesser broadly discusses all the novels via nifty alphabetically sequenced topics, from alcohol, erotica, and religion to xenophobia and zealous. She clearly has her finger on the pulse of Scandinavian society, discussing such topics as childhood abuse, obsessive references to original art, a scarcity of Jewish as well as female and gay cops, and sadism (“the worst sadist in all of Scandinavian literature is Karin Fossum,” whose novels are disturbing in a way that is “manipulatively, personally, intentionally pain-inducing”). In the second section, Lesser switches to third person as “she” describes a personal tour of the three countries. She feels at home in Sweden; Stockholm is “even lovelier than she expected.” In Oslo, a policeman tells her they only have about 12 homicides per year, and “compared to Oslo or Stockholm, Copenhagen is definitely a bit grungy.” Lesser’s opinionated Appendix summarizes the series that she has read, and her recommended list of TV adaptations is user-friendly as well.

Perfect for any die-hard fan of Scandinavian mysteries and culture.

YOU SAY TO BRICK
by Wendy Lesser
Nonfiction

WHY I READ
by Wendy Lesser
Nonfiction

THE PAGODA IN THE GARDEN
by Wendy Lesser
Newsletter sign-up