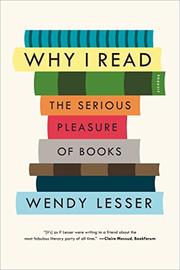 A lover of books reflects on her abiding passion.

More than a decade ago, Threepenny Review founder and editor Lesser (Music for Silenced Voices: Shostakovich and His Fifteen Quartets, 2012, etc.) wrote about the pleasures and insights gained from rereading (Nothing Remains the Same, 2002). Now, in a kind of prequel to that book, the author steps back to ask a broader question: Why read at all? “I am not really asking about motivation,” she admits, but rather about what “delights” and “rewards” she gets. Her responses, thoughtful as they are, offer few surprises. She reads “for meaning, for sound, for voice—but also for something I might call attentiveness to reality, or respect for the world outside oneself.” For Lesser, literary characters are more alive than actual people, and she sometimes finds it “hard to keep in mind” that authors “were all living, once.” Literature functions as a “time-travel machine of sorts”: Faulkner has taken her to the South, Dostoevsky to 19th-century Russia, Rohinton Mistry to the slums of Bombay. Her quest to discover why she reads is inseparable from the question of how she reads, which includes noting characterization and plot, as well as the quality of a writer’s voice, authority and empathy. She uses the term “grandeur” to refer to “panoramic or telescopic” views of reality that allow an author “to get at some kind of massive truth that is hidden behind the facades of daily existence.” Lesser has clear favorites among writers, with Henry James at the pinnacle. She prefers Thornton Wilder’s innovative plays to the self-aggrandizing fiction of James Joyce. Among D.H. Lawrence’s works, Sons and Lovers, she believes, is far greater than Lady Chatterley’s Lover. She has read books on an iPad and iPhone but loves the feel, smell—the solidity—of bound pages. She ends her celebration of books with 100 titles, culled through “excruciating excisions and hesitant substitutions.”

A gift of pleasure from one reader to another.

YOU SAY TO BRICK
by Wendy Lesser
Nonfiction

THE PAGODA IN THE GARDEN
by Wendy Lesser

THE SHELF
by Phyllis Rose
Nonfiction

LIT UP
by David Denby
Nonfiction

AM I ALONE HERE?
by Peter Orner
Nonfiction

EVERY BOOK ITS READER
by Nicholas A. Basbanes
Nonfiction

THE PLEASURE OF READING
by Antonia Fraser
Newsletter sign-up