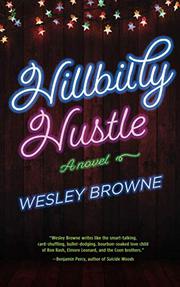 The permanently disheveled, 40-year-old Thompson, who lives in his hometown of Richmond, Kentucky, stumbles into dealing. After winning big at a backroom poker game in a shady nearby town, he is forced into forking over his winnings by one of the players, a nasty drug supplier named Burl, in exchange for a pound of marijuana. If Knox refuses to comply, he won't make it to his car in one piece. Not knowing what else to do with the weed, in which he has invested all his money, Knox starts selling it. It's only a matter of time before he's buying another pound from Burl, making dumb decisions, and getting in way over his head. Burl's sadistic enforcer, Greek, starts paying him unpleasant visits. And Knox's hard-edged new girlfriend, Darla, a tattoo artist with whom he watches old videotapes of My So-Called Life, leaves town. Though the book suffers from an overreliance on sadistic violence and a too-tidy ending, this is a top-notch debut with a winning narrative voice and unexpectedly multidimensional characters. Even as he's making Knox's life miserable, Burl develops an affection for him. "I never seen anything like you," he says to the pizza man. "You're smart, you just ain't no good at thinking."

A promising debut by an author with an amusing approach to life.