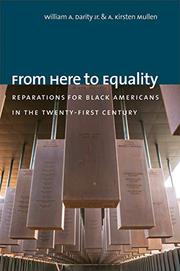 FROM HERE TO EQUALITY

A strong and unusually comprehensive case for making economic reparations to African Americans for the injustices of slavery as well as legal segregation (Jim Crow) and “ongoing discrimination and stigmatization.”

In this thoughtful scholarly assessment of a controversial issue, economist Darity and folklorist Mullen provide overwhelming evidence of “the pernicious impact of white supremacy” and propose a detailed program of monetary reparations, to be paid by Congress, to perhaps 40 million black descendants of slavery. “For black reparations to become a reality,” they write early on, “a dramatic change in who serves as the nation’s elected officials must take place, both in Congress and in the White House.” By chronicling racial injustices since the nation’s founding, the authors hope to “rejuvenate” discussions of the need for action to reverse “gross inequalities between blacks and whites.” Slavery’s “hothouse effect,” they write, created “vast national wealth.” It spurred shipbuilding and other industries, created the need to feed and clothe millions of enslaved blacks, and provided laborers to work plantations and help build railways and subsidize universities. After slavery, blacks continued to experience job discrimination, attenuated wealth, confinement to unsafe and undesirable neighborhoods, inferior schooling, dangerous encounters with the police and criminal justice system, and a social disdain for the value of their lives. “A variety of metrics indicate that, even after the end of Jim Crow, black lives are routinely assigned a worth approximately 30 percent that of white lives,” write the authors,” who also detail the negative impacts on black lives of federal highway construction, urban renewal, and gentrification. They consider arguments for and against reparations and examine complex possible methods of financing and making reparations (from lump sums to payments over time) that might, at the outside, cost trillions of dollars. Though academic in tone and approach, and therefore unlikely to reach a large audience of general readers, the authors are convincing in their arguments.

Essential to any debate over the need for and way to achieve meaningful large-scale reparations.