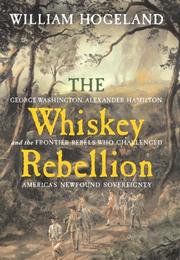 Contrarian account of a contrarian struggle, in some senses America’s first civil war.

If it’s mentioned at all in survey texts, the Whiskey Rebellion is usually seen as an effort on the part of simpleminded frontiersmen to keep Washington revenuers from taxing their corn mash, a sort of postcolonial Snuffy Smith. The rebellion was more complicated, as freelance journalist Hogeland shows; though plenty of roughshod and untutored frontier figures took up arms against the federal government, the movement to resist excise taxes that favored wealthy and large producers of booze over mom-and-pop operations was widely perceived as justifiable opposition to tyranny. Blame it on Alexander Hamilton; the first treasury secretary found it expedient to retire war debts owed to wealthy domestic creditors by levying charges of many kinds on states, communities and consumers. His financier ally, Robert Morris, benefited greatly from the repayment (plus interest, and lots of it) of the war debt; he also “controlled all real power in Congress, as well as the Continental Army” and was, by Hogeland’s account, a scammer and a scoundrel. After the revolution, Hamilton labored to bring the independent-minded western frontier—then extending not much further west than Pittsburgh—under the control of tax agents such as John Neville, who lived on a splendid estate staffed by slaves in the abolition-minded, poor Appalachians; a key moment in the rebellion of 1791 was the incineration of that fine estate by a grim army dressed in blackface, Indian garb and even women’s clothing. Led by an offbeat evangelist who experienced visions and believed in such strange ideas as profit-sharing and a progressive income tax, the rebellion was quickly suppressed by federal troops at George Washington’s order—though, as Hogeland notes, Washington himself took to making whiskey soon afterward, even as his successor, Thomas Jefferson, repealed the hated whiskey tax.

A vigorous, revealing look at a forgotten—and confusing—chapter in American history, one that invites critical reconsideration of a founding father or two.

AUTUMN OF THE BLACK SNAKE
by William Hogeland
Nonfiction