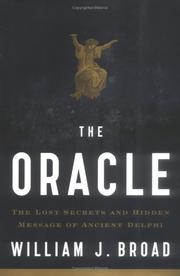 In ancient Greece, a visit to the Oracle of Delphi was de rigueur before any major decision of state. A cult of mystics passed down the title of Oracle from woman to woman, each serving as the mouthpiece of Apollo, god of prophecy. Plutarch, Socrates and Plato were among the Greeks who viewed the Oracle as an invaluable weapon against foes; they credited her, for example, with their stunning victory over the invading Persians in 480 b.c. The slopes of Delphi’s Mount Parnassus, on which the Oracle conducted monthly audiences from her temple’s inner sanctum, bore a steady stream of petitioners looking for advice on everything from the choice of a bride to political strategy. Scientists had long puzzled over the trances that reportedly enveloped the Oracle as she sat on her tripod, surrounded by high priests who relayed her messages. Some credited the trance to vapors that emanated from beneath the temple, but a 1950 French scientific study debunked that theory. In 1996, however, geologist Jelle de Boer and archaeologist John R. Hale decided to re-open the investigation. They eventually discovered that the Oracles were indeed exposed to ethylene, an intoxicating but harmless gas that rose through underground fissures beneath the Temple of Delphi. Broad follows the story with care and diligence, melding complex science and ancient history into a riveting account bolstered by a helpful glossary and chronology. He falters only when trying to bridge the gap between science and spiritualism; his attempt to somehow translate the scientific findings into a proof of the Oracle’s mystical powers seems forced and weak.

Nonetheless, The Oracle is an eye-opening account that will fascinate fans of both ancient history and modern science.

THE SCIENCE OF YOGA
by William J. Broad
Nonfiction

THE UNIVERSE BELOW
by William J. Broad
Nonfiction