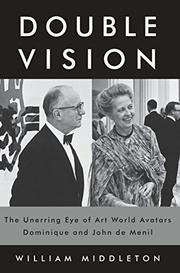 A massive dual biography of Dominique and John de Menil, who did not strive for the limelight but still helped to lead the modern art movement in the United States.

Veteran journalist and editor Middleton spares no details in this history of the French couple who made Houston their home and converted it to a center of the arts. John (1904-1973) and Dominique (1908-1997) collected modern artists such as Magritte and Picasso as well as art from Africa and South America, Byzantine art, and antiquities. The art in their Houston museum is presented simply and with little historical explanation, allowing visitors to become a great part of the experience. Throughout their collecting careers, the de Menils were not afraid to spend their money; in fact, they felt a moral imperative to give back of their fortune. A significant figure in the couple’s maturation was Father Marie-Alaine Couturier, a Dominican priest committed to modern art who was largely responsible for educating the de Menils on the joy of art. In addition to collecting, they built, favoring architect Philip Johnson for their house in Houston, which became a frequent stop for art lovers. Also in Houston is the Rothko Chapel, which contains 14 murals commissioned by the de Menils and Barnett Newman’s Broken Obelisk out front. They were also leaders in African-American shows, including the 1971 De Luxe Show in an old theater. Dominique also headed the exhibitions at the Institute for the Arts at Rice University. Dominique’s style may have been simplicity itself, but she detested small talk and was imperious, authoritarian, and demanding—though also inarguably articulate and deeply committed to her work. John, too, dedicated himself to his work and was often separated from family. As Middleton amply shows, they were devoted to each other and to art, an exclusive partnership. For lovers of modern art, this book will be a treat, while general readers may find themselves skimming some of the 800 pages.

A well-written, highly informative book for devotees of the modern art world.