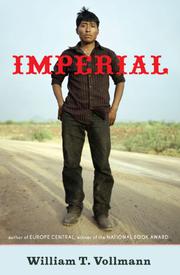 Vollmann (Riding Toward Everywhere, 2008, etc.) has yet to meet a subject he cannot convert into a tome to rival the Manhattan phone book. So it is with this long, strange trip through California’s Imperial County.

“At four-thirty in the morning the air smells sulphurous and sweet like Karachi, and a bird sings.” Readers sensitive to the possibilities of poetry in prose will value a book, no matter how long, that contains that line. Those who value honesty in reportage will admire Vollmann’s admissions of time voluntarily spent among drifters, meth-heads and demimondaines: “Only now do I feel capable of writing novels about American street prostitutes, with whom I have associated for two decades.” Readers who seek a view of the U.S.-Mexico border beyond talking-head banalities will smile at subheads such as “A Clarification About Whiteness” and “My First Tunnel.” Vollmann’s latest doorstopper has endless moments of virtuosity and points of interest, and even if there are limits to patience—one senses that Vollmann prizes extra-long books as a means not of overwhelming the reader but because he lacks a shutoff valve—his book captures perfectly the sun-stricken, toxic landscapes of inland Southern California. This is a place far from the beaches, Mediterranean villas and tony restaurants on the coast, a place of astounding pollution, horrific smells (of which Vollmann provides a Homeric catalog) and hundreds of ways to die (ditto, most featuring drugs, cars and bad guys). Why do people go there, then? They’re mesmerized, perhaps, as Vollmann clearly is, by the unlikely possibilities of a place such as Duroville, a collection of broken trailers on the shores of the fetid Salton Sea, or Mexicali, where Chinese keep portraits of the Virgin of Guadalupe on their walls and so outnumbered Mexicans that they were once outlawed.

Magnificent, impressive and utterly unique. A word to anyone seeking to follow Vollmann’s path, however: Get your gamma globulin shots, and write shorter.

LAST STORIES AND OTHER STORIES
by William T. Vollmann
Nonfiction

DIARY OF A RELUCTANT DREAMER
by Alberto Ledesma
Fiction

TWO-BUCK CHUCK AND THE MARLBORO MAN
by Frank Bergon
Nonfiction

THE LINE BECOMES A RIVER
by Francisco Cantú
Newsletter sign-up