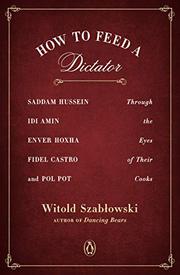 HOW TO FEED A DICTATOR

A Polish journalist’s account of his conversations with the personal chefs of five notorious dictators.

Szablowski (Dancing Bears: True Stories of People Nostalgic for Life Under Tyranny, 2016, etc.) became fascinated by the relationship between dictators and their cooks after watching a film featuring Yugoslavian dictator Tito’s personal chef. In a project that took several years to complete, the author traveled the world to interview the people who had cooked for Saddam Hussein, Idi Amin, Enver Hoxha, Fidel Castro, and Pol Pot. Alternating between third-person reports of Szablowski’s interviews and first-person accounts from interviewees, the author shares intimate historical insights into the meaning of life under dictatorship. Szablowski begins with—and periodically revisits—a section called “Snack,” which deals with Young Moeun’s memories of a youth spent cooking for Pol Pot, whom she remembered chiefly for his good looks and gentleness. The next section, “Breakfast,” recounts conversations with Hussein’s cook, Abu Ali, who recalled his employer’s generosity and fondness for “bastirma” (dried beef). “Lunch” presents the story of Amin’s cook, Otonde Odera, who made “nutritious pilafs [and] baked fish” while also managing to survive the political intrigue that nearly cost him his life. “Dinner” focuses on Hoxha’s cook, Mr. K., who had to “cope with deficit items, unavailable in [Stalinist] Albania” while cooking meals to soothe his “agitated” boss. “Supper” deals with two of Castro’s chefs. One, Erasmo, thrived under the dictator and became a prosperous restaurateur while the other, Flores, lost his mind and ended up living in poverty. The final section, “Dessert,” continues Moeun’s complimentary musings on Pol Pot, which she intersperses with recollections of life as a member of the Cambodian Communist Party. Two strengths of Szablowski’s book are its originality and topicality in a world increasingly governed by political strongmen. However, the complex, fractured structure creates an uneven narrative that is sometimes difficult to follow.

A flawed but intriguing project.