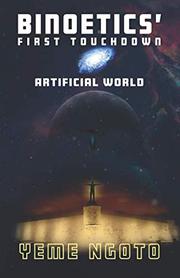 A woman’s mysterious pregnancy proves to be connected to ancient aliens in Ngoto’s debut work of Christian-themed science fiction.

When Elizabeth Redsnow and her husband, John, learned they would be unable to conceive a child, they happily adopted a daughter, Charity. Soon afterward, however, John was killed in a car crash, leaving Elizabeth to raise Charity on her own. Then, a few years later, Elizabeth receives a shock: “How could she possibly be pregnant? She hadn’t been on a date or had sexual relations since John’s death.” Could the mysterious event be related to strange dreams she’s been having, which feature hooded figures? She soon learns from the eccentric Dr. Barracuda—whose offices are located at 13 Gothic St. in Hempstead, New York—that she was impregnated by advanced aliens from another dimension and that her child will grow up with the strength of a biblical hero. She names the child “Binoetics,” a term that the doctor uses to describe children like hers, and the power that he predicted for her son soon becomes apparent—although it quickly gets the boy into trouble. Ngoto’s unusual blend of extraterrestrials and biblical prophecy sometimes makes for a pleasing read. However, it will strike many readers as a bit heavy-handed; much of the book, for example, is given over to explaining the world’s strange mythos, giving it a rather staid and didactic feel. The characters are also disappointingly flat; Elizabeth, for instance, is presented as a perfect evangelical Christian woman who judges others quite harshly: “Elizabeth was sure that Kate’s vanity and her attitude toward men...was self-defeating.” Non-Christians will likely tire of the book’s religious content, although it’s so revisionist—and full of aliens—that even devout readers may not find it relatable. The cliffhanger ending suggests that further adventures for Binoetics are planned.

An offbeat but unconvincing marriage of religion and alien-abduction tropes.