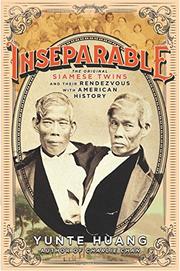 When Chang and Eng were 17, they left their native Siam under contract to showmen who planned to exhibit them throughout the world. Their impoverished mother was given $500 and the promise that her boys would return in five years; she never saw them again. Instead of returning home, they rose to fame and fortune in America. Huang (English/Univ. of California, Santa Barbara; Charlie Chan: The Untold Story of the Honorable Detective and His Rendezvous with American History, 2011, etc.) sets the brothers’ improbable story in the context of American culture, attitudes about race and sex, and political turmoil during more than four decades of roiling change. In the author’s shrewd, entertaining narrative, the twins emerge as astute businessmen who, at the age of 21, unequivocally declared their independence from exploitative managers who worked them “like a pair of mules yoked to a grindstone.” Willful and determined, self-educated and articulate, they managed their careers so well that after a decade they were able to retire to a town in rural North Carolina, which later gained fame as Andy Griffith’s Mayberry. The twins became naturalized citizens and owned farmland as well as slaves. They married two sisters, creating a unique “conjugal structure” that incited “insidious speculations of tabloid peddlers and curious neighbors” who were shocked at the marriage of white women to Asian men. Between them, they fathered 21 children. By the 1850s, the large brood created such tension in the families’ one house that the twins set up two households, alternating three days in each conjugal bed. Staunch Confederates during the Civil War, they saw their wealth plummet after the South lost, forcing them on the road once again. This time, though, they struggled to find an audience, eventually performing in a German circus; now elderly, they were deemed “pathetic,” “freakish and tasteless.”

A vivid portrayal of the trials and triumphs of two determined men.