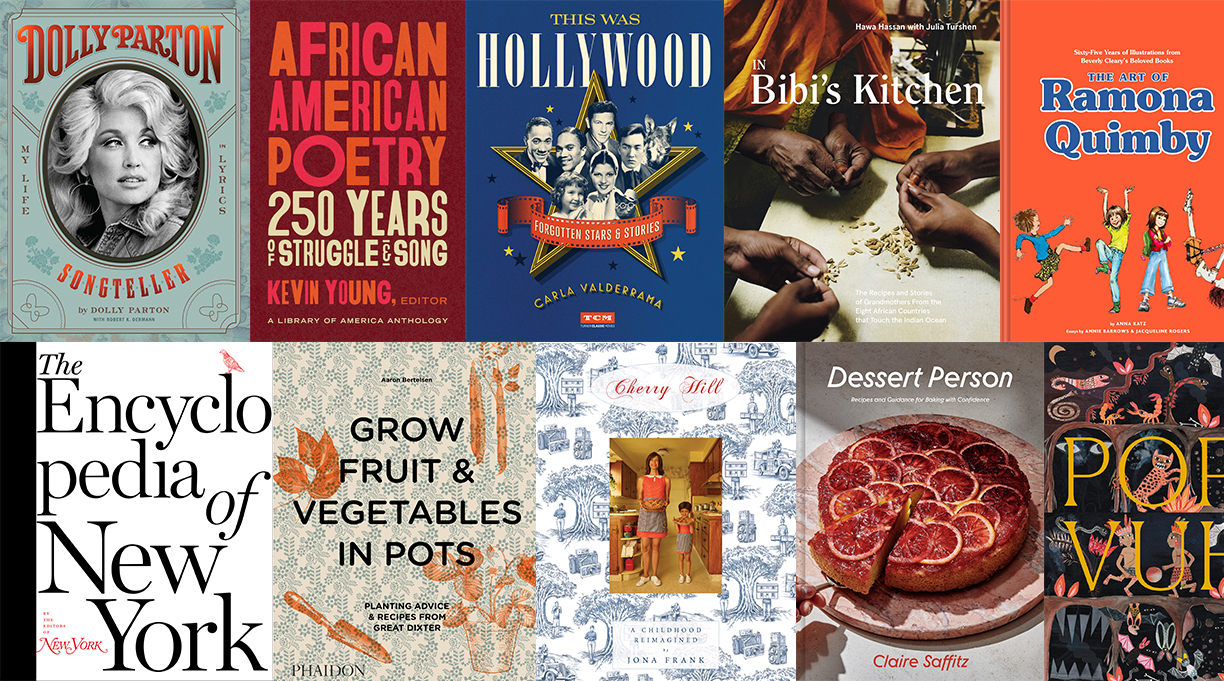 Our editors select their favorite art and photo books, cookbooks, special editions, and other titles for holiday giving.

Dessert Person: Recipes and Guidance for Baking With Confidence by Claire Saffitz (Clarkson Potter, $35): If you considered making a British-style fruitcake for Christmas, it’s too late now—the process takes two months—but if you get Saffitz’s gorgeous book as a holiday gift, you’ll be ready to go next October. The recipes are classified along a scale from “very easy” to “very challenging,” but they’re so clearly written and abundantly illustrated that you may find yourself trying things way above your pay grade. From classic birthday cake and chocolate chip cookies to unusual treats like blood orange and olive oil upside-down cake and babkallah (a combination of babka and challah), there’s something to tempt every palate and skill level.

Mystery Train: Images of America in Rock ’n’ Roll Music by Greil Marcus (The Folio Society, $79.95): Marcus’ book on the origins of rock was an instant classic when it came out in 1975; Kirkus’ starred review said that “despite some pretentious twaddle, Mystery Train is an intriguing and ultimately convincing book.” Forty-five years later, that sounds pretty enticing. The beautifully reproduced black-and-white photos in the Folio Society’s new illustrated edition transport you to Mississippi with Robert Johnson in 1939, to Memphis with Elvis Presley in 1956, to Woodstock with The Band in 1967, to Los Angeles with Randy Newman in 1974. Who could resist such a ride?

In Bibi’s Kitchen: The Recipes and Stories of Grandmothers From the Eight African Countries That Touch the Indian Ocean by Hawa Hassan with Julia Turshen (Ten Speed Press, $35): Next to your cookbooks from Italian nonnas and Jewish bubbes, you’ll want to make room for this volume of enticing recipes from bibis hailing from Eritrea, Somalia, Kenya, Tanzania, Mozambique, South Africa, Madagascar, and Comoros, all of whom are introduced with photos and interviews. Recipes include doro wat, a spicy chicken dish; Matoke, a plantain stew; many sauces and spice mixes; and flatbreads. The authors included two different versions of mukimo, made up of mashed split peas, potatoes, and corn, because a woman living in Massachusetts makes it differently than one in Kenya. This deeply affectionate book will make you want to experiment in your own kitchen.

The Encyclopedia of New York by the editors of New York (Avid Reader Press, $35): When you’re looking for something a little edgier than Kenneth T. Jackson’s 1,561-page Encyclopedia of New York City—which, don’t get us wrong, is indispensable!—the editors of New York magazine are here for you. Their smaller and more attitudinal encyclopedia includes entries on the Greek diner coffee cup; the gay rights movement; halal carts; hip-hop (for which Robert Moses can apparently claim some credit); Beats, club kids, and hipsters; “Fuhgeddaboudit”; dollar pizza, and so much more. Did you know the brassiere was invented in New York in 1913? There’s an entry on book parties, and if it weren’t for the pandemic, this book would have deserved a blowout. (See also “Quarantine.”)

The Art of Ramona Quimby: Sixty-Five Years of Illustrations from Beverly Cleary’s Beloved Books by Anna Katz, essays by Annie Barrows and Jacqueline Rogers (Chronicle Books, $40): Chances are, if you ask a Beverley Cleary fan to picture Ramona Quimby, they’ve got a strong image in mind. Well, their Ramona may be different than mine (pageboy haircut, full cheeks, ’80s attire à la Joanne Scribner), and that’s perfectly fine! There have been no fewer than five major illustrators over the course of our beloved heroine’s 65-year reign— from Louis Darling’s elegant ink drawings to Tracy Dockray’s flat gray-shaded cartoons—and their diversity reemphasizes the timelessness of the stories. Featuring full-color illustrations and insightful essays by Annie Barrows and Jacqueline Rogers, The Art of Ramona Quimby is a must-have for fans of all stripes.

Grow Fruit Vegetables in Pots: Planting Advice Recipes From Great Dixter by Aaron Bertelsen (Phaidon Press, $39.95): In this unprecedented year, many of us made fresh connections to the spaces we inhabit. This beautifully illustrated book by vegetable gardener and cook Aaron Bertelsen of Great Dixter—a historic estate in East Sussex renowned for its charming gardens—will teach you how to grow healthy produce at home, no matter the size or style of your environs. Pro tips for cultivating and caring for fruits and vegetables grown in containers will equip you with everything you need to plan for next spring. Includes a compendium of containers, from classic terra-cotta pots to window boxes, as well as 50 tasty recipes.

The Lives of Saints by Leigh Bardugo, illustrated by Daniel J. Zollinger (Imprint, $24.99): There’s no better gift to tide over fantasy fans patiently awaiting the premiere of Shadow and Bone than this beautifully illustrated replica of The Lives of Saints.The Netflix original series based on Book 1 of Bardugo’s #1 New York Times–bestselling Grisha Trilogy was set to launch in late 2020, though the official date has yet to be announced. Meanwhile, readers can indulge in this series of short tales drawn from the miracles and martyrdoms of saints, from the beloved (Sankta Lizabeta of the Roses) to the obscure (Sankta Ursula, the Starless Saint). Lush illustrations by Daniel J. Zollinger make the book.

Dolly Parton, Songteller: My Life in Lyrics by Dolly Parton with Robert K. Oermann (Chronicle, $50): “My name is Dolly Parton, and I am a songwriter….In a song, I can go anywhere and do anything.” So begins this volume dedicated to the craft of a country music superstar only belatedly being recognized as the national treasure that she is. The book presents the lyrics to 175 of her songs—from “Jolene” and “Coat of Many Colors” to “I Will Always Love You” and “9 to 5,” along with many other lesser-known compositions—accompanied by the stories behind them. And the photos! A lavish scrapbook for Dolly fans.

Cherry Hill: A Childhood Reimagined, by Jona Frank (The Monacelli Press, $45): In this eerily gorgeous and fascinating photo book/memoir, photographer Frank has re-created scenes from her own youth in Cherry Hill, New Jersey, in the 1970s and ’80s. All the trappings of the period are captured in Frank’s vividly colorful pictures—patterned wallpaper, rotary phones, bikes with banana seats, along with a wardrobe of vintage clothes. Actress Laura Dern depicts Frank’s mother, a homemaker, with other actors standing in for the photographer herself as a child, tween, and teen. Written passages recount a budding artist’s fascination with Emily Dickinson and Bruce Springsteen and eventual flight from suburbia into a life of artistic expression.

Popol Vuh: A Retelling by Ilan Stavans, illustrations by Gabriella Larios, foreword by Homero Aridjis (Restless Books, $22): The Popol Vuh is one of the world’s great mythological texts, a document that was written down in Spanish in the early 18th century but reflects the creation myths passed down orally by the Mayan K’iche’people of Central America before the European conquest. Here, Latin American scholar and translator Stavans renders an accessible modern retelling of what he calls “a complex narrative, giving mythical accounts of gods or superhuman beings taking part in transcendent events at an unspecified time in the past…replete with details about the natural world, its plants, animals, and environment, explanation of ritual practices and sacrifice, cyclic renewal, and marriage and funerary customs.” Illustrations by Salvadoran artist Larios offer a colorful, visionary counterpart to the story.

This Was Hollywood: Forgotten Stars and Stories by Carla Valderrama (Running Press, $29): Compiled by the creator of the popular @ThisWasHollywood account on Instagram, this cleverly designed book—chock-full of classic photographs, graphics, and typography—calls to mind the fan magazines that American moviegoers avidly consumed during the 1940s and ’50s. Valderrama resurrects the golden age of Tinseltown in all its splendor and silliness, with spreads dedicated to Hollywood pets, the “White House of Hollywood” (Douglas Fairbanks and Mary Pickford’s Pickfair), the “Sex Symbol That Time Forgot” (Japanese émigré Sessue Hayakawa), the “Woman Who Made Movies” (filmmaker Florence “Lois” Weber), and 1930s child star Cora Sue Collins, who once rivalled Shirley Temple in popularity. For the cinephile on your list, This Was Hollywood will be a treat.