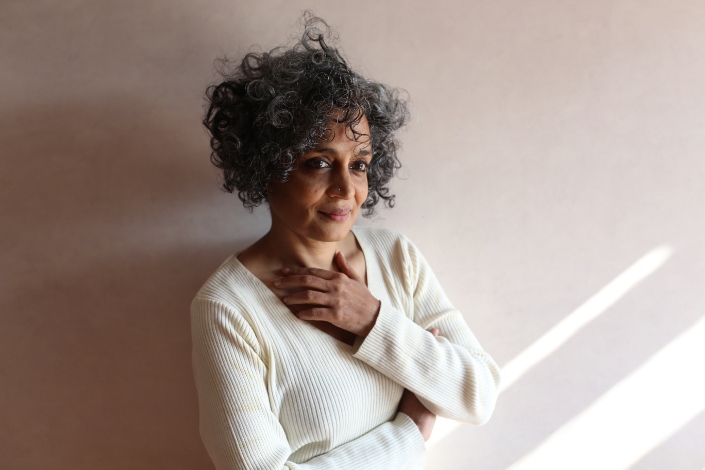 Epic in scope, Arundhati Roy’s new novel, The Ministry of Utmost Happiness  opens with an arresting vignette, one in which the skies over Delhi, India, are suddenly absent of vultures, long the city’s characteristic birds. The vultures are gone owing to a poison called diclofenac, given to dairy cows as a muscle relaxant to “ease pain and increase the production of milk,” as Roy writes. When a cow dies and vultures feed on the corpse, they in turn die horrible deaths. “Not many noticed the passing of the friendly old birds,” the vignette closes. “There was so much else to look forward to.”

“There was a time when the skyline of Delhi would have been considered incomplete without the vultures that loomed in the branches of the trees,” Roy says from her home in the city. “When they disappeared, we didn’t need newspapers to tell us they had gone. Our eyes and our hearts told us. Their absence today fills me with sadness. Their disappearance did not spark the novel, but certainly it’s one of the strands—an intense feeling of loss. And shame.”

Instead, Roy recounts, her novel grew around the seed of a separate but not entirely unrelated moment: the abandonment of a baby at a temple commemorating a martyr, a perfect patron of the lost born into Judaism who converted to Islam and then abandoned it too, leading to his being publicly executed for apostasy. “The first thing I wrote down, years and years ago, was about the appearance of the baby on the pavement in Jantar Mantar,” Roy recalls. “It really happened, one night when I was there.”

From that seed grows a story with many threads, one in which the abandoned baby, a hermaphrodite, grows up a hijra, someone made, as one quips, in a kind of divine experiment: “He decided to create something, a living creature that is incapable of happiness. So he made us.”

Anjum is beautiful, Adam’s apple and all. So is Tilo, a woman caught up in a radical separatist movement that brings her to the attention of the Indian military and its intelligence service. Like many of the other characters, Tilo is not all that she appears to be at first glance; but then, as Roy reveals throughout her pages, which begin and end in a graveyard, identity is a shifting and self-willed thing in a world of “fucked-up unexpectedness,” one in which characters cross boundaries of ethnicity, religion, and sexuality in an effort to find the utmost happiness of which the title speaks, the one that is forever meant to evade the hijras—and perhaps all the rest of us, too.

As Roy says, “All the major characters have borders running right through them—of gender, of caste, of class, of religion, of nation and geography. I realized that only when I was well into the book.” Her characters’ grappling with those borders, which bring them no end of heartache, might be read as a criticism of Indian society, with its strict lines of class and caste and pronounced inequalities of income and opportunity, but Roy is quick to point out that her book is in no way meant to be a doctrinaire program. “I never meant it as a critique,” she says. “I think it’s just how I see things.”

Whether taking them through pain or pleasure, “I loved living with the characters,” says Roy—and live with them she did over the course of a novel that took her more than a decade to write, appearing a full 20 years after her previous novel, the Booker Prize–winning The God of Small Things.

Like the previous novel, Roy’s newest is an engaged story that blends tragedy and political outrage with a humane and hopeful vision of the future, one completely befitting her aspirational homeland. It took a long while to take form, and even that moment of abandonment, that initial seed, began as a jotted note in a journal. “I actually didn’t start writing the novel from the first chapter,” Roy says. “When I started, it was a process of generating smoke out of the layers of emotion, experience, journeys undertaken, and life lived. I began several chapters simultaneously. Seeding the story, if you like. That went on for years. And then, slowly, I started sculpting the smoke, completing the chapters. I was in no hurry.”

Elements of Roy’s own life and experiences resonate throughout the story, as in The God of Small Things; there are even quiet allusions to other writers and their lives, including Salman Rushdie and, perhaps, Gabriel García Márquez. But that’s not to say that the novel is a roman à clef, at least not as such, and as to what is real and what is invented, Roy answers, elegantly, “That osmotic membrane between memory and imagination…nothing is entirely autobiographical. Nothing is purely and exclusively imagined.”

Both The God of Small Things and The Ministry of Utmost Happiness serve to place Arundhati Roy at the forefront of Indian literature, which is not as well-known in the West as one might wish. Some of the problem, Roy says, is that although India is often in the news, particularly because of its booming economy, it’s not easy even for Indian writers themselves to gain an overarching view of the literary scene “simply because Indian literature exists in so many languages.” What seems apparent to her is that, for many reasons, fiction is losing ground to nonfiction, which she also writes, with books such as Capitalism: A Ghost Story (2014) to her credit. “Perhaps that’s true the world over,” she adds. “Sadly.”

A book of sharply realized description, careful character development, and lined storylines, The Ministry of Utmost Happiness is an embarrassment of riches—so much so that Roy now finds herself wondering what section to select to read from when she embarks upon her promotional tour for the book. “It’s a little complicated because of how interconnected the text is,” she says. But I suppose any part I choose will give listeners a sense of the language and the texture. I just read the whole book for the audio version. I really enjoyed doing that.”

And will readers have to wait another two decades for a new novel from Roy? “Truthfully,” she says, “the answer is that I don’t know.” But, she adds, “I don’t see myself as a person who has to produce books at regular intervals. I did not feel duty-bound to write another novel. I wrote The Ministry of Utmost Happiness because it insisted upon being written. I had no choice.”