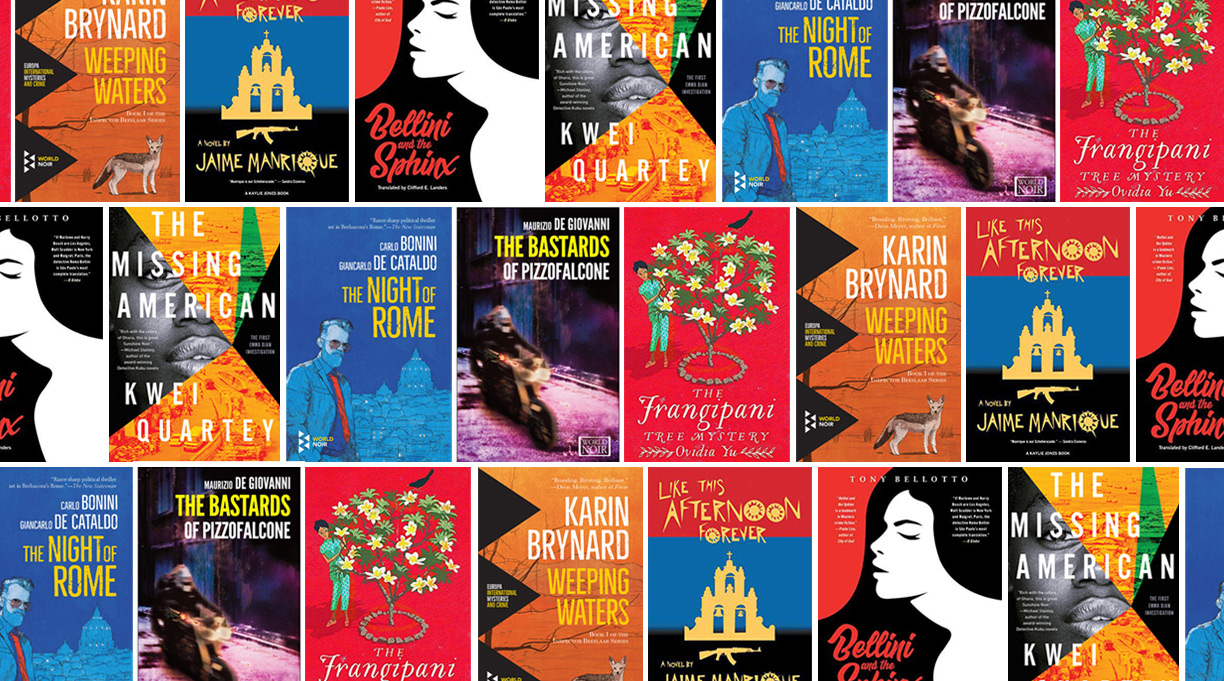 “Aragona’s irritating habit of slowly taking off and then putting back on his blue-tinted aviators, a move no doubt perfected thanks to hours of study before American cop shows, had reached new heights of implausibility.”

This throwaway observation in Maurizio de Giovanni’s gripping novel The Bastards of Pizzofalcone (Europa Editions)—the first in a series of hard-boiled noir set in contemporary Naples—is one of the author’s many tips of the hat not only to his characters’ but his own indebtedness to American crime stories. At one point, a cop from the Pizzofalcone precinct thinks to herself, “snickering inwardly, [that she and her partner] made a fine pair, though better suited to a movie like Lethal Weapon than to the streets of a city like this one.” And later, a monk tells his policeman friend: “[D]on’t you think this theory of yours, that a serial killer is murdering depressed old people, smacks a little too much of an American TV show? Here in our country, these things—these particular kinds of things at least—just don’t happen.”

The monk turns out to be partially correct. These things don’t happen in Naples, or at least, they happen in a very different way than those expecting an “American” hard-boiled solution might expect. And that’s a large part of the pleasure of reading the novel—the way it both meets and yet confounds expectations. The chemistry that occurs when you merge a foreign milieu and society with what is essentially an American genre results in a refreshingly nonviolent, thoughtful, and yet fast-paced novel in which the Bastards (a bunch of reject Italian cops) solve—and sometimes fail to solve—crimes. (De Giovanni credits “Ed McBain, unparalleled master” in his acknowledgements; apparently the “87th Precinct” series was an inspiration.) The fourth title in the series, Puppies, about a baby abandoned in a dumpster and disappearing animals, is forthcoming (Europa Editions, July 2020).

This is an exciting moment for readers of international crime fiction in the United States. Beyond so-called Nordic noir, which continues to enjoy a massive wave of popularity after the success of novels such as Stieg Larsson’s Girl With the Dragon Tattoo (Knopf), we’re fortunate now to have access to a wide variety of crime fiction set in different countries. Many of the examples below were written by local authors for local readers and only subsequently translated into English. For me, these books are fascinating precisely because they weren’t written with American readers in mind. The stories are told from a local perspective, they take certain shared sensibilities and norms for granted, and reading them as an outsider adds an extra layer of tension, interest, and enjoyment to what is already a suspenseful genre.

In Weeping Waters (Europa Editions), the first novel in Karin Brynard’s Inspector Beeslaar series set in rural South Africa and translated from the Afrikaans, a black cop explains to Inspector Beeslaar about a possible suspect, “His people are from the deep desert, there, Botswana-side, and they say he was still wearing skins and eating ants until just the other day.” While Beeslaar mentally sums up his own conundrum as “the only white face at his station … If you’re too tough, you’re the white cop trying to crawl up the black bosses’ arses. Leave things be, and you give men like Hanekom the impression they can continue on regardless. And the black bosses paint you as a closet racist.”

Or there’s Carlo Bonini and Giancarlo De Cataldo’s The Night of Rome (Europa Editions), an action-packed meditation on corruption in the Eternal City, which offers insights on the Five Star Movement, a political party; politics in Italy (“Its profound depths are reactionary… To win, the left wing has got to disappear”); the difference between Gentlemen and VIPs (“Gentlemen were necessarily leftists, and VIPs veered right”); and the city’s fickleness (“Rome recognizes you as long as it’s looking up at you from below. Once you step down from that pedestal, then you’re just one more among thousands…”). The Night of Rome and the Pizzofalcone novels were translated from the Italian.

There’s also Tony Bellotto’s Bellini and the Sphinx (Akashic), originally published in Brazil in 1995, set in São Paulo, translated from Brazilian Portuguese, and prefaced with a Dashiell Hammett quote on the foolishness of trying to read character. And Jaime Manrique’s dreamy Like This Afternoon Forever (Kaylie Jones/Akashic), which tells the story of two gay priests against the backdrop of drug cartels in Colombia. One of the priests hears confessions from women about “how their sons, and sometimes their husbands, but always the males in their family had suddenly vanished.”

For traditional mystery enthusiasts, there’s Ovidia Yu’s The Frangipani Tree Mystery  (Constable/Trafalgar), part of her Crown Colony mystery series now in its third installment, featuring Chen Su Lin, a mission-school educated young woman, and set in 1930s colonial-era Singapore. “I wanted more than a lifetime of toil under my grandmother or mother-in-law,” its heroine says. “It would have also been easier [to find a job] if I had been an English woman rather than a Chinese girl, but I didn’t worry about what I couldn’t change.”

Meanwhile, Kwei Quartey, who was born in Ghana and now lives and works in California, takes readers to Accra with female PI Emma Djan in The Missing American  (Soho Crime, January 2020). “That Ghanian police were constantly looking for a handout from the citizenry wasn’t even a secret anymore. … Everyone, from the lowly constable to the exalted police commissioner, was guilty, and they knew the public knew.”

All the novels discussed here bring readers deep into the worlds in which they take place. They often draw on real events, educate while they entertain, and offer readers the opportunity to occupy a different headspace.