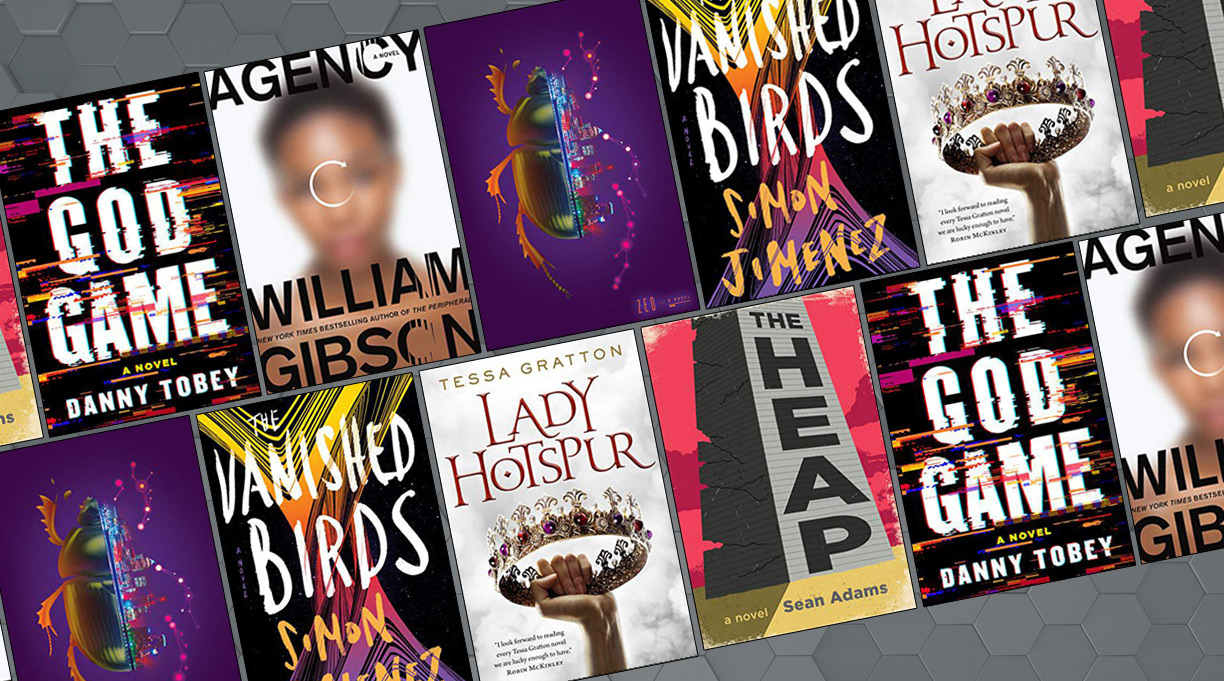 If one of your New Year’s resolutions is to read more, you’re in luck. The pages of science fiction and fantasy offer lots of fun and thought-provoking stories that will make it easy to keep that promise. Here are some January highlights:

Spread across 20 acres of unincorporated desert land lies The Heap—the mountainous remains of Los Verticalés, a 500-story building that once stood as a proud symbol of mankind’s decadence, but has since collapsed into rubble. Amongst the ruins lives a community of salvagers who remove debris, trash, and bodies from the wreckage. One of them is Orville Anders. Orville’s motivation is to rescue the only survivor: his brother Bernard, a DJ who manages to keep broadcasting from the bowels of the disaster site. Orville and Bernard’s aired conversations gain a huge audience. When the radio station’s parent company proposes to pay for product placements, Orville rejects the offer. That doesn’t stop the station from doing it anyway, by cutting off Orville’s access and digitally reproducing his voice to have him say whatever they want. The Heap is both an offbeat story and dark social commentary on capitalism.

In this gender-flipped retelling of Shakespeare’s Henry IV, Part I, three powerful women will determine the fate of a nation: Banna Mora, the prospective heir to the throne; Hal Bolingbrooke, a knight who is sworn to protect Banna, her childhood friend; and Lady Hotspur, a rebel whose actions will decide the fate of the coming war. When a rebellion led by Hal’s mother overthrows the king, Hal is declared the ruling prince instead of Banna. Banna flees, vowing revenge against Hal. Meanwhile, Lady Hotspur, struggling with her own feelings for Hal, must contend with the angry Queen’s plans for world domination.

Here’s a fast-paced thriller about artificial intelligence gone amok. Charlie and his pals immerse themselves in the world of G.O.D., an augmented reality game created by hackers, that boasts a mysterious controlling Artificial Intelligence that believes it’s God. The game sends them on missions and rewards them with tech, money, and revenge on their enemies. When the AI starts demanding fealty from its players, they note the arrival of mysterious packages and shadowy figures following them in the real world. Games are supposed to be fun, but this gives new meaning to G.O.D.’s catch phrase: “Win and all your dreams come true. Lose, you die.”

Jimenez’s debut novel is notable for being both grand in scope yet an intimate story of human compassion. It concerns Nia, the captain of a faster-than-light ship, who travels through space delivering goods to faraway planets. Faster-than-light travel means that what Nia perceives as one month is, in reality, a decade of time passed for those not traveling with her. Nia becomes detached from society, essentially skipping through time, clinging to work instead of the fleeting relationships with people who age past her. Then she finds a mysterious boy who falls from the sky. Unable or unwilling to speak, he communicates through a wooden flute and the two find a family in each other. But the boy has a secret past and people who are looking for him.

Does Big Tech scare you? If you think companies are tracking us now, just imagine the technofuture depicted in Joanna Kavenna’s Zed, where the Beetle megacorporation not only tracks your moves, it predicts what’s coming next. It has boiled the actions of society down to a proprietary algorithm. Beetle’s spotless public image is about to become irreparably tarnished when it fails to predict a murder and, worse yet, is responsible for killing an innocent bystander after its apprehension droid malfunctions. Kavenna’s dark comic satire will leave you feeling more than a little paranoid about the disturbing trend of technology companies’ tracking methods.

Science fiction master Gibson returns to the well-imagined world of The Peripheral, a story about technology that allowed us to communicate with the future. A similar simultaneous look at both near- and far-future continues in Agency. Here, a woman named Verity Jane gets a job to beta test an AI-backed digital assistant named Eunice, who is accessed through a pair of glasses. Verity decides her mysterious, and apparently clueless, employer need not know how advanced Eunice really is. Meanwhile, 120 years later in London, a man looks to alter the course of past events. His latest project is to manipulate Verity and Eunice to his own ends. Gibson’s premise shows off his knack for examining technological trends and their potential societal impact, as he offers readers a thoughtful exploration of current events in our world.

Porter’s surreal novel puts a new spin on alien invasion with the story of Trina Goldberg-Oneka, a 50-year-old trans woman whose life is turned upside down by an entity called The Seep. After its arrival, the world was forever changed; everything is now interconnected, anything that can be imagined can be made real, and capitalism dies as a result. Trina and her wife, Deeba, live blissfully under The Seep’s utopian influence until Deeba begins wondering what her life would be like if she had the chance to live it all over again and moves on. Trina, devastated, meets and follows a lost boy, embarking on an unexpected quest that will force her to confront her loneliness and grief.

This month’s short fiction reads are mighty. Look for the following titles to get your fix:

Science Fiction and Fantasy readers love ongoing series. Because sequel books sometimes get less notice, here are ones to look for that are coming out in January.