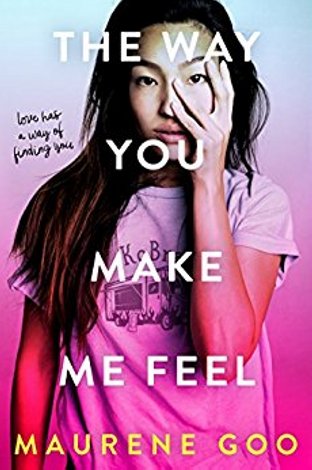 From the cringeworthy Long Duk Dong in 1984’s Sixteen Candles to last year’s Tinder video in which a female user swipes left only for the Asian man, the stereotype of Asian men as less-than-desirable romantic partners is deeply ingrained in American pop culture, in stark contrast to the generally positive (if still objectifying) portrayals of Asian women.

So it was with great pleasure that I noticed a number of recent YA titles featuring Asian male characters as objects of desire, often in interracial relationships, subverting the typical Asian female–white male pairing. More than a passing trend, I hope that this will be the start of a redress in balance resulting in a world in which the intersection of race and gender does not result in entire populations being written out of certain narratives. The next challenge? Let’s see some black female characters as the leads in light rom-coms!

The Way You Make Me Feel by Maurene Goo features “lean yet muscular” Chinese-American Hamlet Wong, he of the floppy hair and beautiful cheekbones, who turns the head of our heroine.

Tell Me No Lies by Adele Griffin, set in the 1980s, is a rare work of historical fiction with an Asian male protagonist—in this case, Korean-American Theo, who is a handsome model as well as being kind, intelligent, and athletic.

Intrigued? Here are a few more titles to pick up: American Panda by Gloria Chao, Antipodes by Michele Bacon, Puddin’ by Julie Murphy, From Twinkle, with Love by Sandhya Menon, Always Never Yours by Austin Siegemund-Broka and Emily Wibberley, The Art of French Kissing by Brianna R. Shrum, and Sanctuary by Caryn Lix.