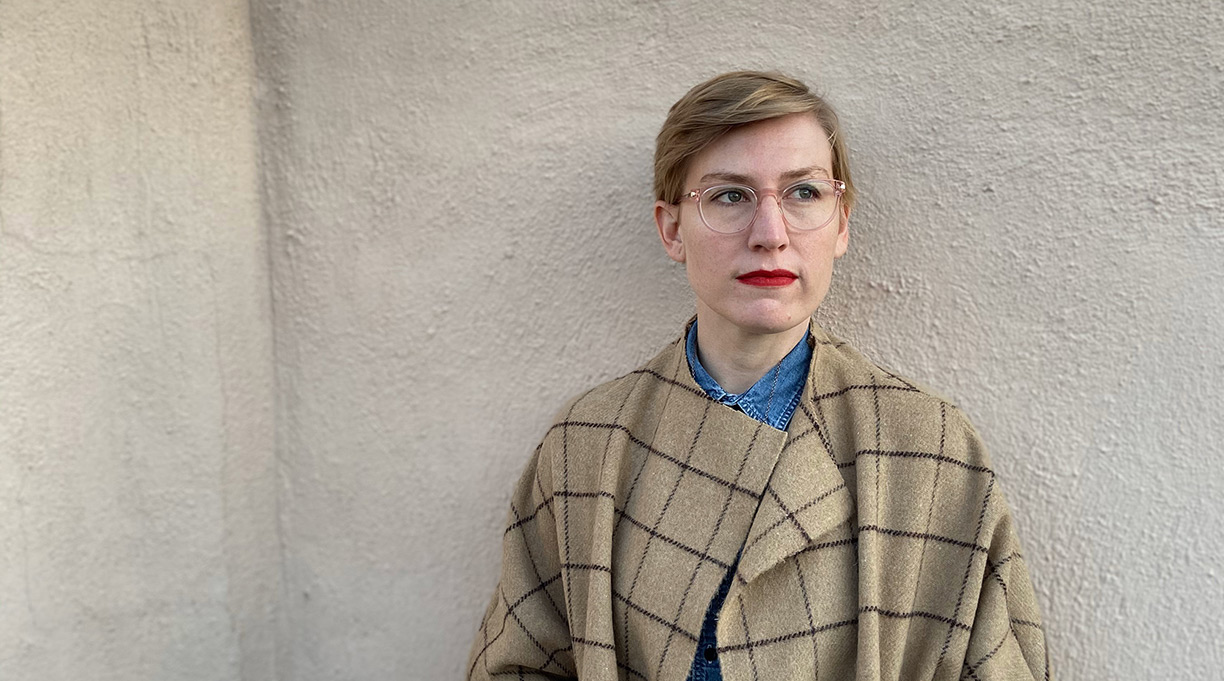 A hybrid of memoir and biography, Jenn Shapland’s insightful debut book, My Autobiography of Carson McCullers (Tin House, Feb. 4), is a sensitive recounting of her discovery of novelist Carson McCullers and, in a very real sense, of her own identity as a lesbian and a writer.

Shapland talked to Kirkus by phone from Santa Fe, New Mexico, the place she and her partner, Chelsea Weathers, chose to make their home after a long road trip through New Mexico and into northern Utah from Austin, Texas, where Shapland had been a graduate student in English at the University of Texas. Austin, Shapland says, had become too crowded and urban—not a place in which to grow. Santa Fe, “a small, tucked-away place,” seemed perfect for them.

But the inspiration for My Autobiography of Carson McCullers began in Austin, where, as part of her graduate program, she worked as an intern at the Harry Ransom Library, which holds a fantastic archive of materials on writers such as Norman Mailer, British poet Edith Sitwell, David Foster Wallace—and McCullers.

One day at the library, a scholar inquired about letters between Swiss writer and photographer Annemarie Clarac-Schwarzenbach and McCullers. Curious, Shapland read them and immediately felt a surge of recognition.

“I had received letters like these,” she writes in the book. “I had written letters like these to the women I’d loved.” These were love letters, she was certain, and, looking back, Shapland tells us that she discovered them “at the exact right moment,” when she was wrestling with her own issues of sexual identity and secrecy. A six-year closeted relationship with a classmate she had fallen in love with during her first year at Middlebury College had just ended, and Shapland felt at sea. It was liberating to discover that “there are other people who [felt] this way.” From that moment, she wanted to find out everything she could about McCullers. “I was never exposed to her work,” Shapland admits, but she began to devour the novels—The Heart Is a Lonely Hunter, The Member of the Wedding, Reflections in a Golden Eye, to name a few—and everything she could find about McCullers’ life. “I immediately started tracing her,” she says.

The idea for her book evolved gradually, beginning at the Vermont Studio Center, where she was a resident in 2014. She kept writing short pieces about McCullers but at the time wasn’t sure if they would be the seeds of essays, a biography, or a memoir. In February and March 2016, as the project took shape, she was invited to stay at the Carson McCullers house in Columbus, Georgia, which steeped her in McCullers’ world: the furnishings in the house and also the particular feeling of Columbus. “It reminded me of Lake Forest,” Shapland says, referring to the wealthy, conservative Chicago suburb where she grew up. In that community and in her family, she says, there was “overwhelming silence” about mental health issues and personal struggles. As a teenager, not knowing that she was queer or what it meant to be queer, she felt like an outsider. McCullers, she imagined, might have felt the same way.

The residence also gave her access to archives at Columbus State University, which holds much material about McCullers. There, she found what is undeniably a treasure trove for a biographer: transcripts of McCullers’ taped therapy sessions with Mary E. Mercer, a psychiatrist with whom McCullers fell in love.

McCullers had intended the transcripts to serve as the basis for an autobiography—a project that never came to fruition—but they did convince Shapland that she was right in thinking that McCullers was a queer woman without the words to define herself. Biographers, critics, and friends’ memoirs, she believes, engaged in “retroactive closeting” by refusing to acknowledge McCullers’ love for many women. “I felt,” Shapland says, “that I was rescuing her from misunderstanding by others who hadn’t gotten it and missed what was right there, a huge element of her personal life.”

As sure as she feels about her interpretation of McCullers, Shapland admits that the whole enterprise of biography makes her uncomfortable. She is surprised by biographers who assert what their subject thought or felt. “How do they know?” she asks. Writing about another person feels transgressive; with McCullers, she feels she “came up to the limits about what you can ever know about another person.” In her new project, a collection of essays, she’s sharing some of what she knows about herself. “I’m more comfortable,” she says, “working on my own story.”

Linda Simon, a frequent reviewer for Kirkus, is the author of Lost Girls: The Invention of the Flapper and other books.