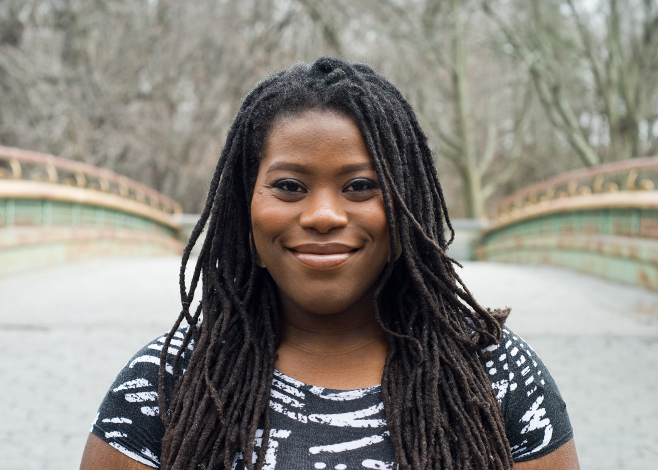 Kaitlyn Greenidge knows that her debut novel, We Love You, Charlie Freeman, is a disorienting read. She spent eight years grappling with how to render its vexing premise with nuance and substance. Her account of a black family hired by a research institute to raise a chimpanzee as their own is as wild as you would expect and more thought-provoking.

“Every couple of days when working on this, up until the end, I doubted whether or not this was a good idea, whether people will understand what I am trying to explore, and whether it will be taken seriously,” Greenidge says. Her perseverance paid off, leaving us with a strange but powerful debut novel that charms as it prompts reflection.

Greenidge credits the support of her MFA instructors at Hunter College and the haven of the graduate school library, where she worked on the book seven days a week even after earning her degree. “I would commit to staying at my writing space for a four-hour chunk,” she says. “Even if I wasn’t writing anything or felt like I wasn’t writing anything, I would still stay in that chair for four hours before I would let myself leave.”

The result of her painstaking efforts is on one level a compelling tale of a family attempting to communicate with a chimpanzee via sign language. On another, it’s a far-reaching exploration of the limits of communication that plague families, friendships, and communities. Alternately heartbreaking and humorous, the book illuminates the ways that words—spoken and signed—confine us even as they aspire to expand and connect us.

Greenidge writes powerful descriptions of how sign language is acquired and used by the family members, ape researchers, and the chimpanzee. Collectively, they offer fresh and important perspective on the real, perennial tensions around identity and inclusion in the United States. We learn, for example, that divides exist even in the structure, grammar, and word usage of the black and white versions of American Sign Language, reflecting historical segregation, cultural differences, and varying speech patterns.

In one telling scene, the family’s eldest daughter, Charlotte, clashes with an ape researcher over their different signs for Africa. He thinks the black sign (curling a fist into the sign for the letter A, circling the face and flattening the tip of the nose) is offensive and racist. “Some people, a long time ago, used to believe that all Africans had, you know, a flat nose and that it was inferior,” he explains. At the same time, she interprets his sign for the continent (opening a palm wide, spreading fingers over an imaginary hump and then clamping them shut into a fist) as a vulgar gesture for a woman’s breasts. “It’s not his fault,” Charlotte tells her younger sister Callie. “Max only knows white-people sign language.”

Greenidge isn’t looking for readers to draw any particular conclusion about the miscues and misunderstandings the novel illuminates. But she would like them to reflect on how its observations about race and language play out in their own lives. “It [takes you to] a really rocky place that nobody likes to be in, where there is no real answer to something,” she says. “I would hope that the novel gets the reader comfortable with being in that space and seeing the strength that can come from being in that place.”

That’s where change and action come from, she posits: “You can’t really move forward unless you’re in that moment of discomfort and instability.”

The novel incorporates historical voices from the research institute’s founding in the 1920s to complicate our understandings of racial progress.  At the same time, it aptly captures the sad awkwardness of many contemporary diversity and inclusion efforts—the sense of good intentions gone wrong. Her depiction of the town high school’s all-white production of The Wiz, instigated by Marie, an “angry black woman” who attends every performance and “cheerfully lacerate[s] the poor cast members after each show for their inveterate cluelessness,” may make you laugh and cry. “Courtland County bowed to Marie’s demands [to celebrate black history] because the people there, like well-meaning decent and caring people anywhere, were loath to think of themselves as racists but also loath to think of race at all,” Greenidge writes.

Some readers choose novels simply because they tell compelling stories, and We Love You, Charlie Freeman delivers on that front too. “Writer Danielle Evans talks a lot about—and I completely agree—African American literature as being the vegetables of American literature: ‘you better eat these, but you’re not going to enjoy them’ kind of thing,” Greenidge says. “I really wanted to write a book that was funny, engaging, and had a premise that most people

will read, even if they’re not particularly interested in reading about race or language.”

Developing empathetic characters was a breakthrough for Greenidge. “For a long time when I was writing this, it came off as kind of brittle, almost like satire,” she explains. “Probably halfway through, I came to the conclusion that each of these characters just really wants love and acceptance in their life. That sounds really simple and kind of hippy-dippy, but that was actually an important thing for me to realize about the characters and what was driving them.”

Similarly, the novel-writing process encouraged her to examine her own motivations and intentions. “Working closely with a writer [instructor Colum McCann], I began to try and figure out how to exist as a writer in the wider world,” she says. “Colum takes that role very seriously.  He’s not pompous about it, but he takes it as a trust that he is a writer in the world.” He encouraged Greenidge to ask questions such as, What does it mean to be a writer? What am I able to do? When do I speak or not? For whom am I speaking? And he taught her to embrace “that core feeling and emotion and response to the world as a writer” and to view it as a strength, not a weakness.

In We Love You, Charlie Freeman, Greenidge uses her voice to share black experience as embodied in the Northeast. “I think even within mainstream black media there’s an assumption of a black monolithic identity, that every black community in every part of the country is the same, and that’s really not the truth,” she says. “Black people, like people everywhere, are influenced by their surroundings, and that has a real influence on how different communities form. I wanted to talk specifically about what it is like to be black in New England and to just point out and to talk about how there is a difference.”

In the future, readers can expect Greenidge to continue exploring the African diaspora. “That diaspora is...so varied and wonderful and brutal and innovative that I don’t think that well will ever run dry for me. I think the ways I talk about it, though, will change,” she says.

“I feel like most American novels are about race in one way or another. It’s just that they’re conscious or they’re not conscious of it. It’s very telling when you read a novel that is supposed to be set in present-day New York and every single character is white. Other people may not designate it as such, but I think that is definitely saying something about race.”