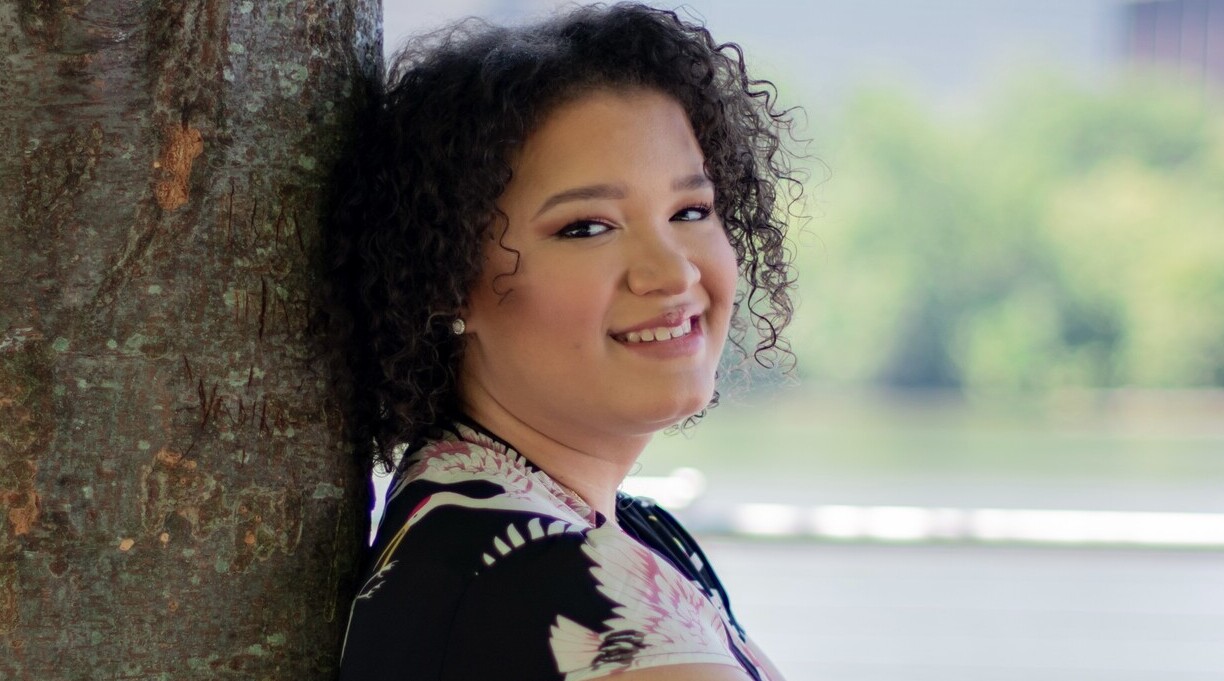 In her warm, thoughtful debut, Lane Clarke explores the experiences of a teen born of sexual assault. Michie, a junior in high school, is struggling to define herself in a college essay when an opportunity to reconnect with her estranged mother arises. With the help of her best friend Jojo, and her possibly-more-than-a-friend Derek, Michie navigates heavy feelings about her mother and her own existence. Love Times Infinity (Poppy/Little, Brown, July 26) is a story built of honesty, heart, and appreciation for good friends in a world that doesn’t always know how to make space for complexity.

We spoke to Clarke via Zoom from her home in Northern Virginia. The conversation has been edited for length and clarity.

When did you start writing this book?

I think I started it in July 2019—God, time, what is it? [laughs]—and I didn’t intend for it to become what it has. I was writing for myself, so it’s like trying to figure out when you wrote a journal entry. It was a pretty fast process: The first draft only took a couple of weeks. So, that’s when it started, but it’s become my whole life. I’ve gotten to watch it get bigger and bigger.

Do you find that it has lived different lives, or was your first draft a lot like what readers will see?

It’s always looked a lot like what’s being published. I write short first drafts, so pretty much everything that was in that very first draft has survived. I look at it now as an expanded version of what it was but still very much exactly what I always envisioned it to be.

The book feels like a time capsule of this moment—you engage with a lot of popular culture throughout.

I wanted to make these characters’ lives feel real and give them real interests. I also think that’s what makes a friendship so full—having those shared connections that are so ingrained in language and culture. These kids are multifaceted people; they’re online, they’re in tune, and it was fun to explore.

Derek, for example, is an athlete and a popular guy, but he’s also a nerd. All the popular kids I knew in high school were dorks! Everyone comments, “All the kids in Michie’s school are so nice.” Well, everyone in my high school was pretty nice! I didn’t see, at least, any bullying. I think that’s how we think of high school because it was a big part of the media for a while, but some kids are just nice.

It’s true, you don’t really have antagonists on the page. Even when characters hurt one another it’s not from a cruel place.

When I was a teenager, it was really—you know, “hurt people hurt people.” Friendships ended and relationships ended, a lot of times because you were seeing the other person as the enemy and operating from a place of “guilty until proven innocent.” I think with hindsight, it was important to me to depict that relationship with friends and family where you love them, but you don’t quite know how to express yourself in healthy ways.

At first Renée, Michie’s mom, was going to be more of a villain. But I didn’t want to take away her story, and I wanted to show how sometimes decisions are made in the moment that you later on wouldn’t make. That’s all tied to people’s personal traumas, and I wanted to give Michie the chance to see, this person never set out to hurt you, that’s just what happens when people are hurt.

You create a real atmosphere of love and listening in this book. Are there conversations you hope to start?

Gosh, there are so many! Definitely one is mental health, especially in teens, especially in Black teens. I think there is still stigma in seeking therapy and getting medication. I want to show these processes are here for you—and of course, there are conversations to be had about health care and whether it’s provided. We have to prioritize our mental health because it affects every single aspect of our lives and our relationships. It permeates everything.

And there’s the conversation around abortion and access to abortion. Michie starts the story a lot like I did, thinking, How could I possibly be pro-choice when that choice was almost made for me? Do I deserve to be here or not? And I think people on both sides are saying, Well, what about these kids who are born of these situations? Well, these kids exist, so maybe we can give them a chance to speak their side. What I’ve learned from my own experience and from others’ is that ultimately we need choices. I think that’s one of Michie’s main journeys throughout, when she’s thinking about her mother and her classmate who had an abortion; it’s about people being able to heal from their trauma in whichever ways they can. If that results in abortion or if it doesn’t, it’s always about choice. My hope is that it opens people’s minds to what happens when birthing people don’t have choices. Michie has a strained relationship with her mother because of this background, and that’s very real; it causes a lot of trauma for children and their parents. I want that conversation to acknowledge a new perspective and for people to hear each other out and to lean toward what’s going to give people their best futures.

Can you speak more on Michie’s journey and the choices you made around the outcome with Renée?

Being 16, turning 17, it’s so messy. Michie doesn’t really know what she wants. She knows she wants to go to college, maybe be successful. She’s at those ages where it’s like, I’m just trying to survive here. I think clean wrap-ups are great for escapism, but they’re not always realistic. Sometimes, the best closure you can get is walking away and leaving the door open. I wanted it to feel real and to build that love and compassion. And for teen readers, to say, just because something doesn’t turn out perfectly doesn’t mean it wasn’t worth the time you spent on it. Not everything has to happen right now. You have so much life left to live.

Speaking of life left to live—can you tell us about any upcoming projects?

I don’t know how much I can say about project specifics. I’m working on [a second book], which is exciting. It’s a new format I’m really eager to work in. I love the main character, and I think people are gonna love her just as much as Michie. And of course she has a great friend group—you can’t do life without some ridiculous friends!

Anything I haven’t asked about?

Something I haven’t seen a lot of people talk about is Michie’s grandmother. I hope people connect with her and her quirks. A lot of us were raised by our grandparents, and they have their very specific way of living. I hope that brings some laughs and some recognition.

Ilana Bensussen Epstein is a writer and filmmaker in Boston.