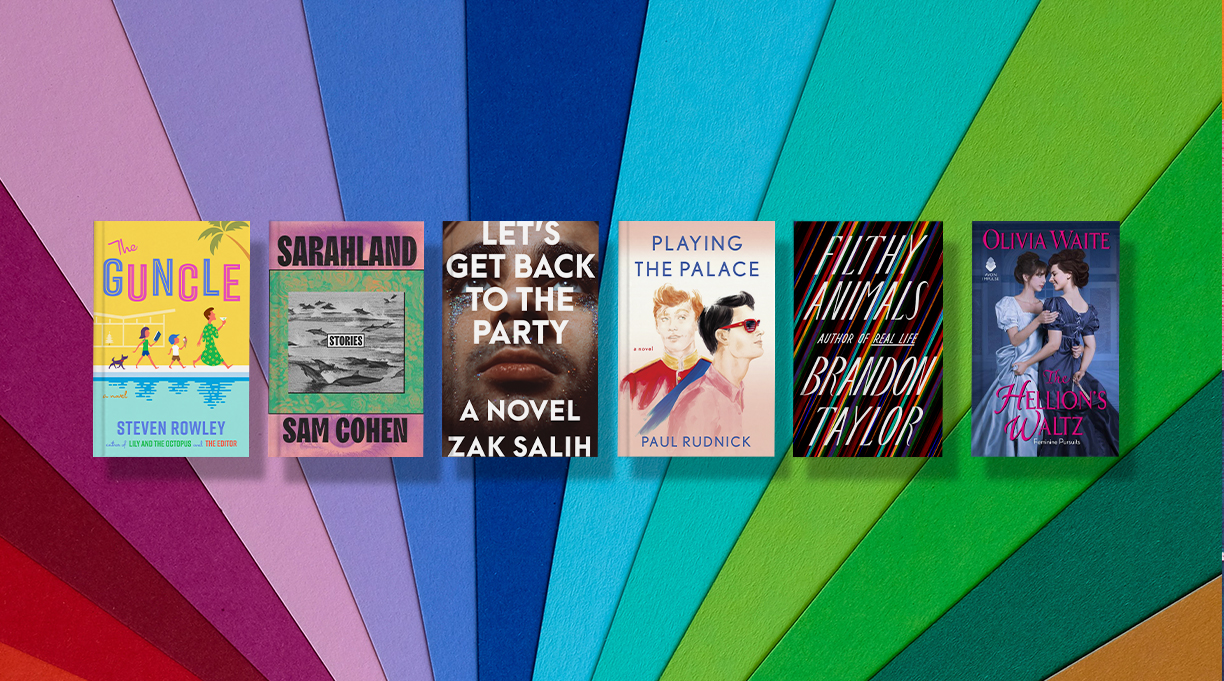 Illustration by Kirkus; background by Daniele Levis Pelusi on Unsplash

When you combine LGBTQ+ Pride with hot June weather, what you get is queer summer reading! Here are some of the season’s best books for your tote bag.

Sarahland by Sam Cohen (Grand Central, March 9): In Cohen’s striking collection of short stories—her fiction debut—all the protagonists are named Sarah. The stories have something else in common, according to our starred review: “A deep thematic interest in the multidimensionality of the self—especially the queer, Jewish, nonmale self.…A bold collection that explores how we might break free from or reimagine ourselves and our places in the universe.”

The Guncle by Steven Rowley (Putnam, May 25): Move over, Auntie Mame: Gay Uncle Patrick is moving in on your territory. Patrick, the former star of a beloved sitcom, is grieving the death of his partner, Joe, when his 6-year-old niece and 9-year-old nephew arrive to spend the summer with him while their father is in rehab. Our review says Patrick is “a memorable character, and it’s genuinely thrilling to read screenwriter-turned-novelist Rowley’s take on the mechanics of stardom.…There’s true insight here into the psychology of gay men, Hollywood, and parenting.”

Playing the Palace by Paul Rudnick (Berkley, May 25): “Everyday American falls in love with British royal” is an ever popular trope—I have fond memories of Millie Myerson and the Prince of Wales by Penina Spiegel, which I read circa 1982. Heather Cocks and Jessica Morgan updated the story in The Royal We (2015), and Casey McQuiston gave it a queer spin in Red, White Royal Blue (2019). Now playwright and humorist Rudnick has produced what our review calls “a light and frothy take on royal romance” when “an American event planner deals with the public scrutiny that comes with dating an openly gay British prince.”

Let’s Get Back to the Party by Zak Salih (Algonquin, Feb. 16): This debut novel is set in 2015, shortly after the Supreme Court ruled in favor of marriage equality, and it explores the tensions between gay men who want to get married and others who don’t want to turn into “breeders.” Sebastian and Oscar are childhood friends who’ve chosen to lead very different lives. Sebastian is a high school teacher who lives in the suburbs and wants to settle down while Oscar cherishes his freedom. Our review says, “There’s a deep tension between the two that’s sexual but also political: Neither can entirely stomach the life the other has chosen.…An insightful examination of two of the many ways gay men present themselves in contemporary America.”

Filthy Animals by Brandon Taylor (Riverhead, June 22): Taylor’s first novel, Real Life, was shortlisted for the Booker Prize last year. Now he returns with a story collection that our starred review calls “a deeper achievement.” Several stories focus on Lionel, a Black queer graduate student in mathematics. “The settings here are bleak—alienated suburbs; petty college campuses—and the mood unsparing. But the daring in these stories is bracing.”

The Hellion’s Waltz by Olivia Waite (Avon, June 15): The latest in romance novelist Waite’s Feminine Pursuits series follows a young pianist in Regency England as she falls in love with a woman who’s trying to pursue justice for the weavers of Carrisford. “This scheme is pure screwball comedy, and it sets the tone for a lighthearted story in which there are no barriers to love,” according to our starred review. “No one is the least bit perturbed by the idea of an affair between women.” Maybe this one should be shelved under “Fantasy” as well as “Romance”—just the thing for a day at the beach.