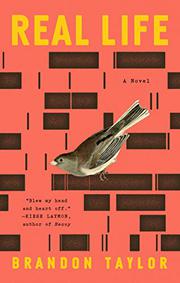 A young gay black man comes of age at a moment when American culture feels bitter and closefisted.

Wallace is a graduate student in the Midwest, desperate for his genetic experiments on nematodes to be successful. He’d also like some semblance of a relationship with Miller to work out, never having had a boyfriend before; meanwhile, Miller isn’t certain he’s gay. Having just arrived from Alabama, Wallace has a lot of whiteness to adjust to. His friends are white; so are his colleagues. He notes the “tasteless, strained, diluted flavor of white people food.” “Microaggression” is a term anyone paying attention to race and gender issues in America has heard, but in this flinty debut novel, there’s nothing micro about them, as when a Machiavellian female colleague who may be sabotaging Wallace’s experiments tells him that “I have to prove myself because you and men like you are always counting me out" and then goes on a dizzying bender of benighted cultural appropriation. (The fact that it feels unresolved whether she is his saboteur is a fault in the novel.) Or when a French grad student alludes to Wallace’s “deficiencies,” i.e., the facts that he grew up black and poor. Taylor deserves admiration for making it so clear how racism and homophobia feel: “When you tell white people that something is racist, they hold it up to the light and try to discern if you are telling the truth,” for example. The novel, by a staff writer at Lit Hub, has generated a lot of buzz, and its unflinching forays into our culture wars are cleareyed. Beyond its status as a testament of political injustice, though, it deserves accolades for its insights into the ways trauma hollows out a person’s soul. The novel ends on a note of hope as Wallace and his new friends are toasting one another by the lake at the end of summer, but, as one in a tradition of searing novels about gay men, it’s better read for its chill: “Is this all his life is meant to be, the accumulation of other people’s pain?” Wallace wonders.

WHAT BELONGS TO YOU
by Garth Greenwell
Newsletter sign-up