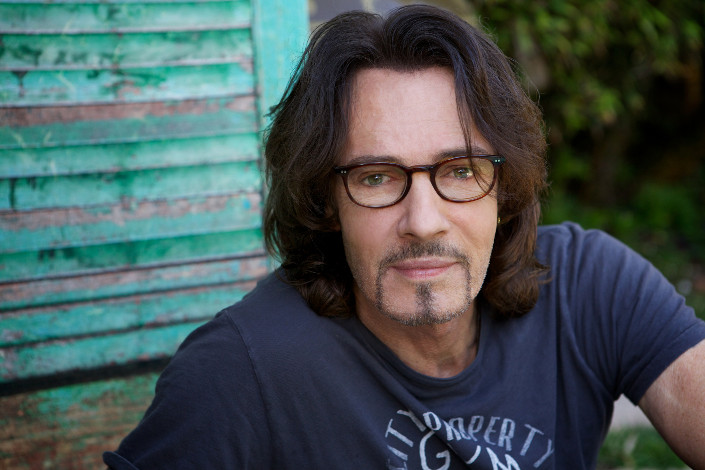 Pop star/soap star/1980s heartthrob Rick Springfield is driving along California’s Pacific Coast Highway at one in the afternoon as we talk on the phone. In my mind, I contrast that image to his protagonist in Magnificent Vibration, Springfield’s first novel and second book, following his widely acclaimed, New York Times best-selling memoir Late, Late at Night.

In Magnificent Vibration, Horatio “Bobby” Cotton spends much of his late, late nights driving the hills and valleys of Los Angeles in his rented gerbil of a Kia, which is crammed with his new best buddies—Alice Young, a sexy nun he lusts over, and Lexington Vargas, a sometimes gun-toting, former gang member, high school groundskeeper and son of a famous UCLA heart surgeon. Then there’s Bobby’s best friend of all, Woody Woodsman – Bobby’s penis.

Bobby and Woody meet the hot nun and the gargantuan gangster after Bobby steals a book called Magnificent Vibration: Discover Your True Purpose, finds an 800-number scribbled inside the cover, dials it on his cell phone, and God answers.

“All I can say is that at this stage of my currently imploding adult life, the last person I ever expected to have a direct line to was mom’s superhero, Big ‘G,’ little ‘o,’ ‘d,’ …,” Bobby explains.

In truth, Bobby’s life has been imploding for decades. First, his mother named him Horatio, which got “the daily crap kicked out of him.” Then he developed large ears, freckles, and big teeth, which also meant kids taunted him by calling him “Alfred,” as in Alfred E. Neuman from Mad magazine. And Bobby seemingly always had “a persistent little boner” that would not stay down no matter how much Bobby played with his toy robots and thought about baseball. The love and rock of Bobby’s life—his depressed sister Josephine—became an invalid after attempting suicide. A preacher’s wife volunteered to help in Josie’s caretaking, only to use the opportunity to seduce Bobby and Woody, which destroyed his family, and…on and on.

“I’m sure if I’d decided to be a stockbroker I probably wouldn’t have been able to write this book,” says Springfield. But being a songwriter did help. “I’ve always tried to write in as unique style as I can…which is probably the reason why I was able to put the word ‘moot’ in a rock song,” he says, referring to his signature hit, “Jessie’s Girl.”

But in fact, ever since Springfield’s youth in Australia, he’s been a writer of stories and a reader—such a voracious reader that he stole books from secondhand bookstores, since he couldn’t afford to buy them.

And like Bobby, the book thief, Springfield grew up in a home that was sexually repressed “because of my mom growing up believing sex was wrong,” which may be why, as young Springfield sat in his family’s Church of England and listened to the ministers drone on and on in monotonous voices, he drifted into boredom and started “looking at the girls and thinking about things…”

“Things”—that euphemism brings us back to Woody, the luscious nun, and the grounds-keeping gangster. Like Bobby, they too had copies of Magnificent Vibration that included God’s direct phone number. And like Bobby they were at spiritual crossroads, something that Springfield knows all too well.

“I was really raised thinking that God would smack you if you did something bad, but if something good happened, you know, you got down on your knees and thanked him. And I could never reconcile those two things—like you beat me with one thing then something good happens and I’ve got to turn around and say, ‘Thank you, sir, I’ll take another,’ ” he confides. “I had a bad relationship with my spiritual side because of that. And it really, really took a long time before that could kinda get to a place where I wasn’t angry at God.”

But then he got into Jungian analysis, read a book by a therapist who called God “Arthur,” in order to make him seem more familiar, and Springfield’s beliefs evolved and softened. “I think every atom in the universe is connected and somehow that forms God,” he says.

And he takes what he’s learned and weaves it into Magnificent Vibration, even calling God “Arthur.”

As Springfield continues his drive down PCH, I mention that god is dog spelled backwards and Bobby has a dog named Murray. So when one combines God and dog, one has Arthur Murray, as in Arthur Murray Dance Studio.

Springfield laughs. He didn’t realize he’d done that. But one of the things that makes Magnificent Vibration such a fun, quick read is Springfield’s innate voice. And that voice is one of humor, even when exploring sex and God.

Suzy Spencer is a New York Times best-selling author whose latest book is the memoir Secret Sex Lives: A Year on the Fringes of American Sexuality.