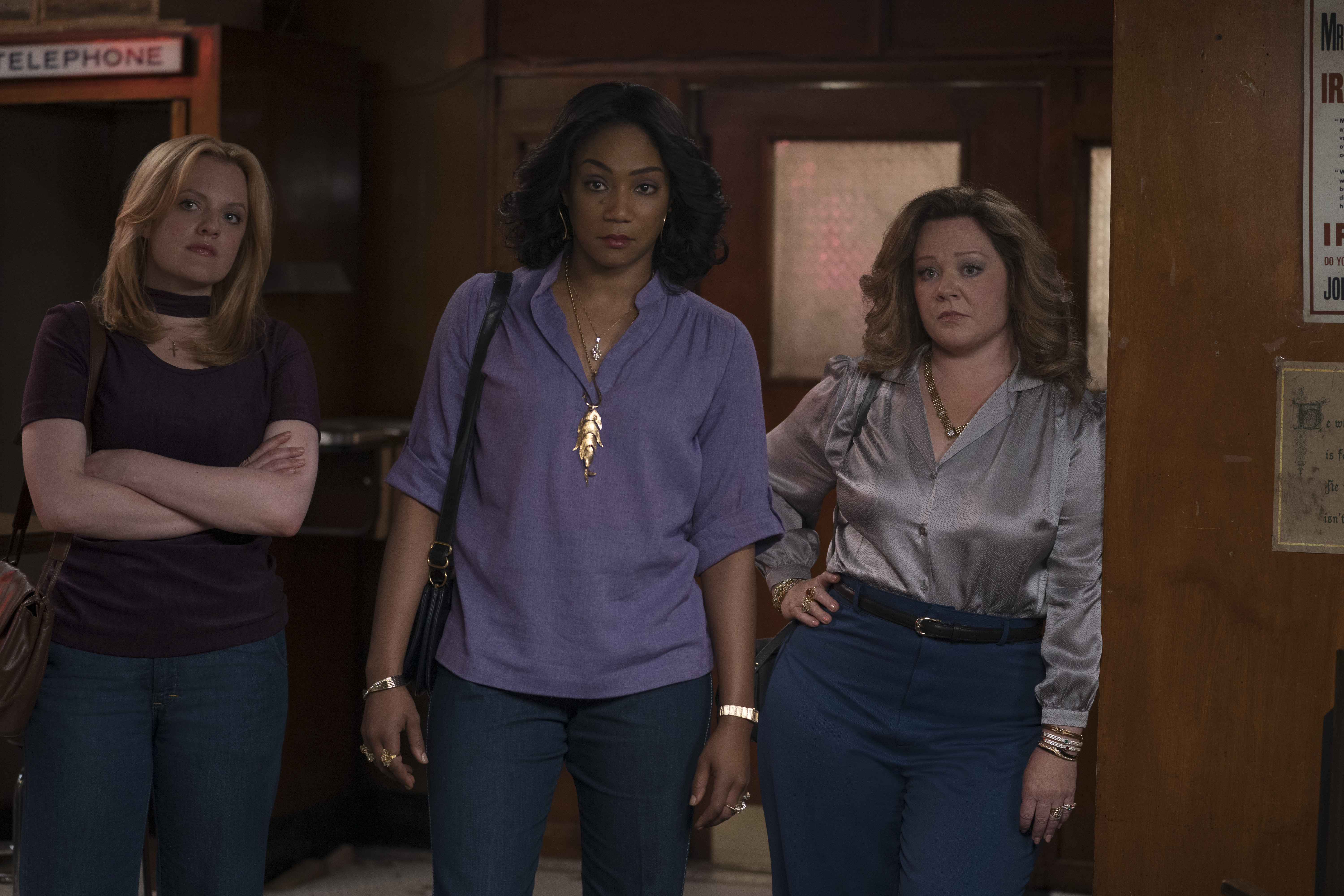 “It’s a man’s world,” sings Etta James over the opening credits of The Kitchen, a gangland tale of 1970s New York starring Melissa McCarthy, Tiffany Haddish, and Elisabeth Moss. It’s a statement that could be applied to the entire gangster film genre. Francis Coppola’s Godfather trilogy, Martin Scorsese’s Goodfellas and Casino, and Quentin Tarantino’s Reservoir Dogs and Pulp Fiction were all tales of violent men jockeying for power. The women in these crime sagas, when they appeared at all, were mainly wives, girlfriends, or collateral damage. The Kitchen, written and directed by Straight Outta Compton writer Andrea Berloff, puts these women front and center—but still unimaginatively follows the age-old ganster-film formula to the letter.

It’s based on the 2014-2015 DC Vertigo comic-book series of the same name, written by Ollie Masters and illustrated by Ming Doyle, which tells the story of three Irish-American gangsters’ wives—Kath, Raven, and Angie—who take over their imprisoned husbands’ collection racket in New York’s Hell’s Kitchen in the mid ’70s. All three women have been treated poorly by the men in their lives—and in Raven’s case, violently abused. Their new criminal dealings give them their first real taste of power—and the first sense of control over their own destinies. But things start to go bad early on when they beat up a made man in the Mafia, and they connect with a superviolent hitman of their acquaintance who was recently released from a mental hospital. Still, they manage to expand their criminal enterprise. Then their husbands get out of jail, and they’re not pleased with what the women have been doing. Numerous killings ensue, and before too long, Raven’s power corrupts her absolutely, leading to even more murders—and a grim ending.

The film keeps the basic premise, but it sets events a few years later—bypassing the 1977 New York City blackout, portrayed in the comics—and changes several names; Kath, Raven, and Angie, for example, become Kathy, Ruby, and Claire. The movie also diversifies the comics’ blindingly white cast with African American actors Haddish, as Ruby, and Common, as a new FBI-agent character. As in the comics, the story of the women’s empowerment is undercut by formulaic gangster-tale tropes. For instance, despite Claire’s years-long history as a victim of domestic abuse, she finds seemingly sociopathic satisfaction in committing acts of violence herself—which leads her to a career of murdering virtual strangers and hacking up their corpses. Indeed, none of the women seem to think twice about killing anyone who gets in their way. When the trio terrorize a group of wealthy Hasidim—a campaign that ends with one of the men shot in the head on his doorstep—it’s clear that the director assumes that the audience is on the women’s side. Indeed, the film seems to wave away the women’s many horrible crimes with the excuse that they’re just protecting what they’ve built. The fact that a majority of the women make it to the end of the film hardly feels like a triumph. It just means that more people will be senselessly killed in the future.

It’s really a shame that the movie has so little desire to tinker with the gangster formula, as many of the actors do stellar work with the tired material. McCarthy, as Kathy, makes her character surprisingly sympathetic; Moss’s performance as Claire makes her terror and joy feel visceral and real. Margo Martindale, as Ruby’s awful mother-in-law, brings her usual brilliance to a thankless role, and Bill Camp delivers a fresh and unnerving take on a by-the-numbers mob-boss part. Even Domhnall Gleeson manages to humanize the aforementioned hitman character. Haddish’s performance as Ruby, however, feels oddly off-the-cuff, which may be a function of her relatively underwritten role in a formulaic story. After all, an old TV crime drama once claimed that there were eight million stories in the naked city—and there are certainly better ones than The Kitchen.