Screener: The Nine Lives of Christmas 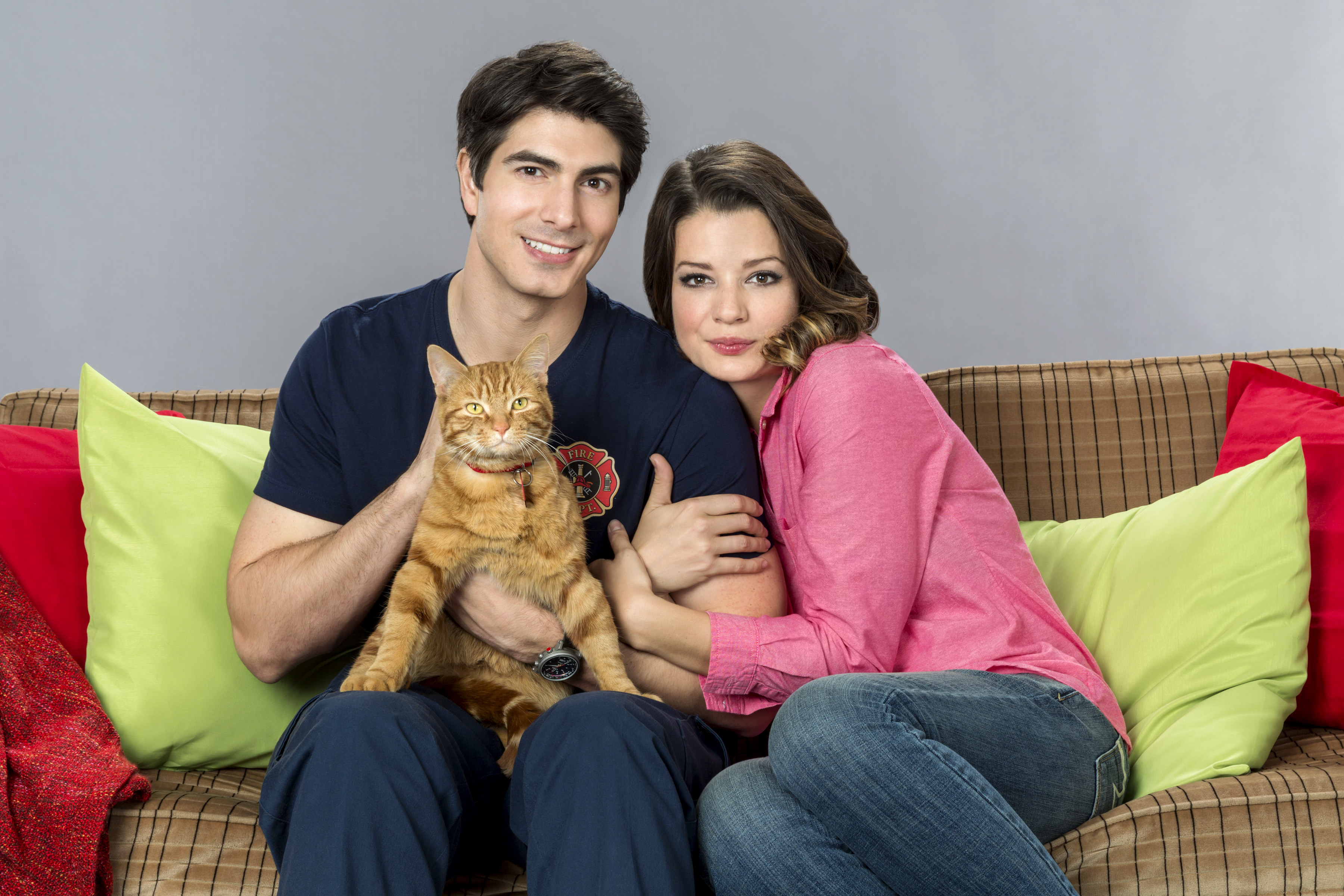 Made-for-TV Christmas films are an annual ritual on networks such as Lifetime, Netflix, Freeform, and especially the Hallmark Channel, which has released more than 150 holiday-themed romances since 2008. Many of these are based on books, including 2017’s The Christmas Train, based on David Baldacci’s 2002 novel, and The Christmas Cottage, from Samantha Chase’s 2012 romance. Both drew audiences of more than 4.5 million viewers—and many more during repeat broadcasts throughout the holiday season. Indeed, Hallmark is well-known for re-running its films every year, thus making it possible to see one of its true classics on Dec. 7: The Nine Lives of Christmas, a 2014 movie based on Sheila Roberts’ 2011 romance.

The book doesn’t break much new ground in its tale of small-town firefighter Zach Stone and pet-store employee Merilee White, who meet-cute in a supermarket a few weeks before Christmas and bond over their fondness for cats. He’s just taken in a stray feline named Ambrose, and she has a cat named Queenie at home, which she’s hiding from her landlady. Zach and Merilee have an immediate connection, but he’s wary of commitment (and has a snooty, rich girlfriend named Blair, who, of course, hates cats); Merilee is socially awkward, self-conscious, and not a little lonely. But after a few mishaps—including Blair getting Merilee fired from her job, and the landlady discovering Queenie—Zach and Merilee manage to find their way to a happy ending.

It’s a formulaic tale with few surprises—except, perhaps, Roberts’ somewhat odd decision to tell a portion of the story from Ambrose’s perspective. The cat likes both Zach and Merilee, so he decides to do what he can to get the two together: “He finally concluded that some naughty kitty behavior might send Zach running to her for advice.” Readers also find out that every feline has nine literal lives—or rather, eight reincarnations. Ambrose remembers all of his past existences, including one in which a young Zach tried to save him after he was hit by a FedEx truck, and another in which a careless Blair ran him over with her car. He also has thoughts such as, “Oh, for the love of catnip, kiss her”—and these bits of comedy wear very thin, very fast.

Fortunately, the film does away with this business; Ambrose is just an ordinary cat, albeit a charming one. The movie also benefits enormously from the casting of Brandon Routh as Zach and Kimberley Sustad as Merilee—both incredibly appealing actors. Routh played the title role in the 2006 film Superman Returns, and his work in the criminally underrated CW show Legends of Tomorrow went on to showcase his wholesome appeal. Sustad recently appeared in a major role in Netflix’s SF show Travelers, but Hallmark has smartly continued to hire her, as well—most recently, for this year’s Christmas movie Sense, Sensibility Snowmen, cowritten by novelist Melissa de la Cruz.

However, Nine Lives’ screenplay is the real star. It was written by veteran TV-movie scribe Nancey Silvers—the daughter of classic comedian Phil Silvers!—and offers viewers a master class in how to write a book adaptation. It not only fixes numerous flaws, but also adds invaluable improvements.

In the book, for example, Zach interacts with only one other firefighter—a bro-ey guy named Ray, who refers to women as “chicks” and considers a cat to be an insufficiently manly pet. (Even Zach himself, in the early pages, makes an unpleasant crack about Ambrose being a “wussy” name.) In the movie, however, Zach’s colleagues, and especially his boss, Chief Sam (wonderfully played by Trapper John, M.D.’s Gregory Harrison), encourage Zach to take a chance on commitment with a woman who makes him happy—and they all love Ambrose, as well, who becomes the firehouse mascot; at one point, Sam even takes time to extol the virtues of cats.

The novel’s Merilee is rather passive and adrift, with few notable skills. In the movie, however, she’s not only actively working to become a veterinarian, but also has an impressive knack for home renovation—as well as Christmas decoration. (Her small apartment is so festive, in fact, that it’s a bit hard to believe.) She’s also a lot more fun, overall, as is Zach, compared to their aggressively bland book versions.

Indeed, Silvers’ screenplay outdoes the book again and again. Zach is renovating a house in his spare time, for instance, but in the novel, it’s not integral to the plot; in the film, however, it allows him to offer Merilee a place to stay when her landlady kicks her out, which give the pair a lot more time to hang out together. Roberts, strangely enough, puts her characters in the same room relatively rarely, and the latter part of the novel tiresomely deals with Zach’s relationship with his mother—who doesn’t appear in the film at all.

Readers would do far better to put down the book, which Kirkus judged to be “so slight in both plot and length that many readers may feel cheated,” and watch the movie, instead, which features a finale involving a firetruck and not one, but two cats. But if you miss it on Dec. 7, don’t worry—one always gets a second chance at love, especially if you have a DVR.