Some Picture Books Worth Voting For 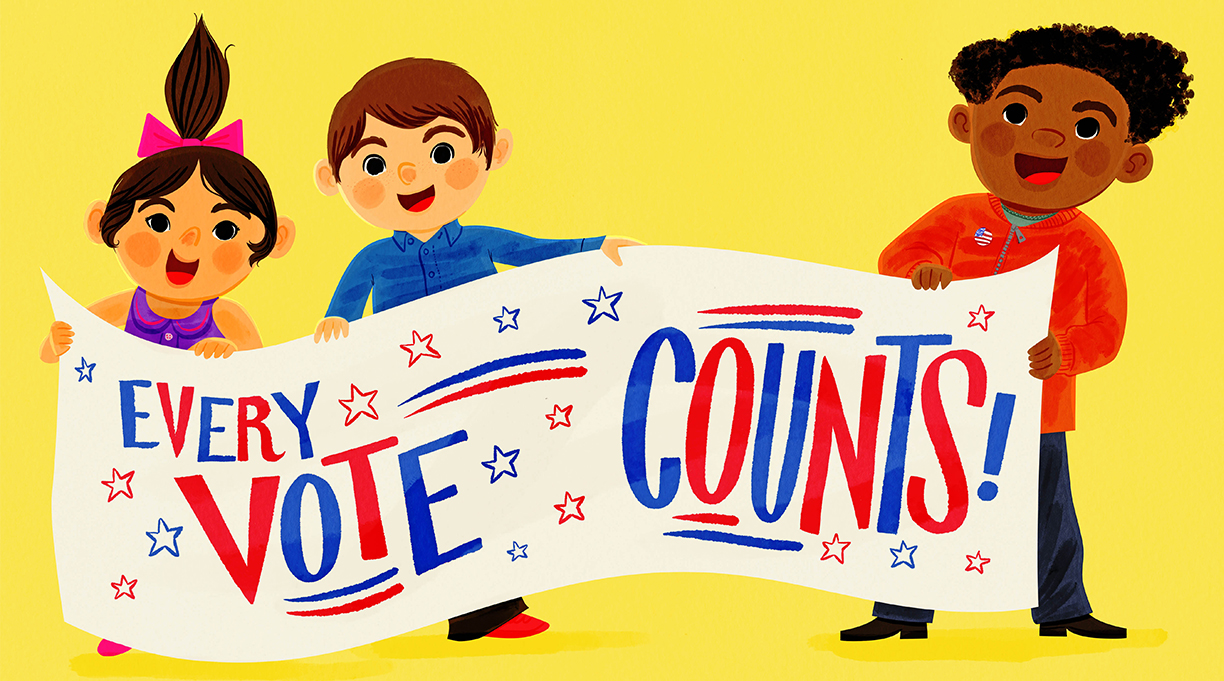 Illustration from Vote for Our Future! by Micah Player

Even though presidential elections roll around every four years in the United States, it’s an occasion that doesn’t inspire many children’s books; usually we can count on seeing a scant handful. Not in 2020. This year, we’ve seen a veritable boomlet of picture books that in some way address the electoral process. With just a couple of months before Election Day, we thought we’d corral some of the best that address this complicated, critical civic undertaking.

In V Is for Voting (Henry Holt, July 21), Kate Farrell and Caitlin Kuhwald use the superficially simple structure of an alphabet book to deliver a bracing, even thrilling paean to activist democracy. With entries such as “H is for homelands that we’ve occupied” and “N is for never forgetting what was,” readers come away really feeling that “M is for matter—and every vote does.”

Jonathan London and Frank Remkiewicz’s irrepressible Froggy has gotten dressed, learned to swim, gone to the doctor, and engaged in 28 other activities. Now it’s Froggy for President! (Viking, May 12), and the accident-prone amphibian finds himself pitted against Frogilina in the election for class president. There’s more slapstick than substance, but for series fans, it’s an introduction to political campaigning at the elementary school level.

On the serious side, Mark Shulman and Serge Bloch also use a classroom election—for class pet—as a way to introduce readers to the process in I Voted (Neal Porter/Holiday House, Jan. 21). Author and illustrator emphasize the importance of making an informed choice—and that choosing not to vote has its own consequences.

The multiracial, multicultural student body of Stanton Elementary School shows child readers that even though they cannot yet legally vote, they can still make a difference in Margaret McNamara and Micah Player’s Vote for Our Future! (Schwartz and Wade/Random, Feb. 18). These children engage in an energetic, upbeat get-out-the-vote campaign in their neighborhood, finding ways to inspire even the most disengaged voters so that “the future began to change.”

It’s important to remember that democracy takes place outside of the United States, too, and two of the best of this year’s crop come from South America.

In A Small History of a Disagreement (Aldana Libros/Greystone Kids), Chilean creators Claudio Fuentes S. and Gabriela Lyon depict a conflict within a school, when a new science building threatens a venerable tree in the schoolyard. In Elisa Amado’s translation, the history teacher turns the conflict into “an exercise in civics”—but it’s not an empty one. This group of students demonstrates that disagreement can lead to fruitful collaboration. (Maybe it should be distributed in Congress.)

Lion has always been the undisputed King of the Jungle, but his imperial ways lead the animals to decide they’d prefer to be a democracy. Under rules such as “candidates cannot trade gifts for votes” and “candidates cannot eat their opponents,” Monkey, Snake, Sloth, and, yes, Lion vie to becomeThe President of the Jungle (Nancy Paulsen Books, Jan. 7). Via Lyn Miller-Lachmann’s translation, Brazilian creators André Rodrigues, Larissa Ribeiro, Paula Desgualdo, and Pedro Markun deliver a funny story that doubles as an informative primer.

Finally, though not a book about the electoral process as such, The World’s Poorest President Speaks Out (Enchanted Lion Books, Aug. 18) nevertheless stands as a tribute to the ideals of democratic government. Adapted from Uruguayan President José Mujica’s speech to the 2012 United Nations Conference on Sustainable Development by editor Yoshimi Kusaba for the original Japanese edition, illustrated by Gaku Nakagawa, and translated by Andrew Wong, the book brings Mujica’s message to U.S. readers. His insistence to world leaders that “shared human happiness is the greatest treasure of all” is one we all need to keep in our minds as we head off to the ballot box.