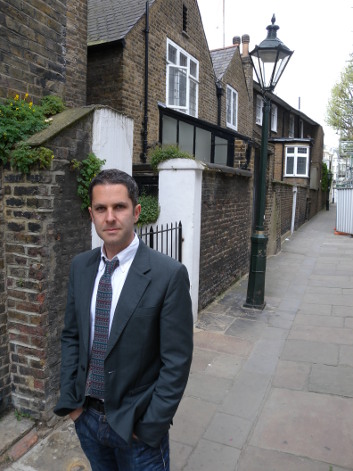 For years, the ideas underpinning The Rise and Fall of Great Powers, Tom Rachman’s follow-up to his best-selling and lauded debut, The Imperfectionists, have been running through the author’s life.

As a journalist who’s lived in New York, Vancouver, Rome and London—just to name a few—Rachman identifies with the unattached characters in both of his books. “There’s a special space for the rootless, and that, in a way, is its own setting,” Rachman says. “Perhaps this has a special fascination nowadays, when people are no longer ‘New Yorkers,’ or ‘French,’ or ‘Chinese’ or what have you, but instead are a patchwork of different influences, experiences and places and don’t know which ones, if any, they are.”

As in his books, Rachman speaks in long, brilliant sentences, and the words spill out in a fast tumble. At one point in our interview, he stops himself, asking if he’s talking too fast or getting too far off topic. But Rachman is such a natural storyteller, and has such a unique insight into the world, that his words—both spoken and on the page—almost can’t come fast enough.

Despite the book’s grounding in themes of globalization and rootlessness, Rise and Fall is first and foremost a story about Tooly Zylberberg—one of the more vivid characters you’re likely to encounter this year.

“She came before the themes,” Rachman says. “The very first idea came to me in a slightly peculiar way. It was a striking image that formed the seed for the whole book, really. I had an image of a child placed inside this room on her own. In the room were two grown men who didn’t intend harm but who didn’t speak to her in any way—one an old, rumpled man, the other a younger, quite dashing fellow. She sort of sat in the corner and wondered what to do.”

Over the next three years, Rachman put the pieces together—why was Tooly in that room, and what happened next? Tooly is looking for her own answers about what happened to her. The reader picks up her life in a musty, undervisited bookshop in Wales. She’s purchased the shop on a whim and is trying to shed her itinerant lifestyle and settle into quiet books in a quiet village. Eventually, as happens in our Facebook era, an ex-boyfriend reaches out with information about someone from her past. Tooly is hesitant to look backward—she’s used to moving forward without a glance over her shoulder at the people left behind—but there are unanswered questions about her life, and Tooly returns to New York City to find some version of the truth.

Rise and Fall alternates chapters between Tooly’s childhood in Bangkok, as the daughter of an expat software engineer, through her early 20s in New York City and then to her present-day hunt for the truth. Along the way, there are detours to locales such as Italy, Australia and upstate New York.

The result is a tapestry of her life, which allows the reader to watch Tooly grow. “I was fascinated with the idea of the change of personality over time and the way in which we see our own changes or are blind to our own changes,” Rachman says. “Everyone has the experience of running into a friend from 10 or 15 years earlier. My thought always is, ‘Oh, they changed, they aged, certain features have changed or are absent, or their true nature has come to shine in a way.’ However, the one thing we don’t tend to think about is that we tend to change ourselves in analogous ways.”

The title, then, reflects the metamorphosis across Tooly’s life. Great powers have entered her life and had dramatic effects, only to be replaced by others as her personality shifts and her worldview evolves.

“There is a tension in her,” Rachman says. “She’s terribly conflicted by the sense of troubling irresolution about her past and her story and an inability to know what the hell her life was about. On the other hand, there are elements she realizes she can’t get to the bottom of and other elements that are quite painful and which she feels guilt about.”

This conflict comes down to a basic question that everyone must answer: Do we let people into our lives, or do we not? In the novel, this tension is embodied by the characters of Venn and Humphrey—the dashing, yet distant, and rumpled, yet warm, characters from Rachman’s first image. “She gets sucked back into the puzzles of her life because of the fact that she wants to live as Venn would live—not caring—but she is not made that way.”

Rachman—and his readers—are pulled deep into Tooly's mind and personality. Rachman’s books have a unique and strong ability to open a window on real human motivations.

“The great interest of writing and reading is being able to access a variety of different people,” Rachman says. The challenge, therefore, of creating a realistic female character was no different than creating any realistic character. “It seems the thrill of fiction is that it’s not your life and not the reader’s. It’s the possibility of alternate experiences viewed with extra scrutiny and psychological depth that we’re not allowed to reach in our encounters with people in everyday life. All of that difficulty pauses for a moment when we’re dealing with fiction. We’re suddenly able to penetrate another mind.”

Rachman is coy about his next project yet uses the same careful, clever language to describe why. “While it’s still under way, it feels not fully formed, not ready to be exposed to the air yet,” he says, “and if I did so, it could crack the shell of it. It needs to be cared for.”

Richard Z. Santos is a writer and teacher living in Austin. His work has appeared in The Rumpus, The San Antonio Express News, Nimrod, Kill Author and the Texas Observer, among others. He’s currently working on his first novel.