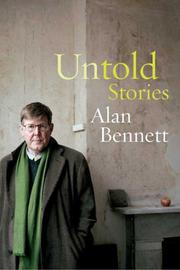 An eclectic, entertaining and shelf-bending collection of essays, memoirs, introductions, diaries and commentary from the noted English actor, playwright and art-lover.

In his introduction, Bennett (Writing Home, 1995, etc.) alludes to the colon cancer he battled in the late 1990s, and he concludes this massive and moving anthology with an essay about that experience—one of the strongest of many strong pieces. He quips, “Sometimes I felt that more people had seen the inside of my bum than had seen some productions at the National Theatre.” This appealing self-deprecation is a hallmark of Bennett’s prose, including his opening essay, a long piece about a number of his relatives—but with a sharp focus on the mental deterioration of his mother. Bennett also writes about his first awareness that he was gay (including a touching moment with his father, who asks, “You’re not one of them, are you?”). Bennett includes segments from his diary (1996–2004), with comments on the deaths of many of his friends and coevals—among them, John Gielgud, Alec Guinness, John Schlesinger and Alan Bates. He comments, as well, on the death of Princess Di, 9/11, the Iraq War (which he despises). There are a couple of very compelling sections about the plays he’s written (for stage, radio, film and television), and some essays about another of his loves—paintings. (In his diary, he chronicles visits to galleries all over the world.) There’s also an interesting text of a speech in which he identifies four paintings that ought to hang in every English school. Bennett loves the poetry of Philip Larkin, and that poet’s name and words pop up frequently in these pages. Among the best pieces is “Staring Out of the Window,” a brief, lucid essay about writing. Another very strong and troubling essay deals with a physical assault he suffered in 1992.

An informed mind and heart, a generous spirit—these are the human qualities that emerge on virtually every page of this splendid collection.

KEEPING ON KEEPING ON
by Alan Bennett
Fiction

A LIFE LIKE OTHER PEOPLE’S
by Alan Bennett
Fiction

THE LAYING ON OF HANDS
by Alan Bennett
Fiction

THE CLOTHES THEY STOOD UP IN
by Alan Bennett

KEEPING ON KEEPING ON
by Alan Bennett
Nonfiction