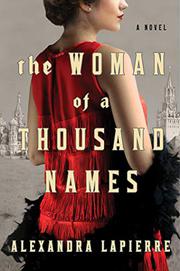 THE WOMAN OF A THOUSAND NAMES

The glamorous and fraught life of a Russian aristocrat who survives war, revolution, and several difficult relationships.

This massive novel, based on the life of a real woman, represents a huge amount of research by Lapierre (Between Love and Honor, 2012, etc.), as recorded in her substantial bibliography. Maria Ignatievna Benckendorff nee Zakrevskaya, known as Moura, is precociously intellectual, a young doyenne of imperial Russian society. When she marries her first husband, Ivan “Djon” Benckendorff, a Russian Estonian nobleman, she follows him to Berlin, where she becomes the belle of the czar’s diplomatic corps. Then, after the Great War and the Bolshevik Revolution, the glittering world Moura knew lies in ruins. She manages to survive by her prodigious wits, her fluency in several languages, and her appeal to men. Scrabbling in Saint Petersberg, Moura is separated from her children, who are consigned to what’s left of Djon’s Estonian estate after his assassination. Among her conquests are Robert Lockhart, a British agent implicated in a plot against Lenin; Maxim Gorky, the writer who narrowly escaped several purges; and H.G. Wells. The novel has all the earmarks of an exhaustive biography, with quotations from original sources—correspondence, diaries, and press clippings—often taking over the narration. The real Moura kept much close to the vest, including the details of an ordeal in a Bolshevik prison. Lapierre respects Moura’s privacy by not imagining the experience—but shouldn’t fiction free an author from such scruples? Likewise, on the “hypothetical” question of whether Moura was a Soviet spy, a British spy, or both, Lapierre lets the truth interfere with a good story—fictional Moura never acknowledges, not even to herself, that she’s an informant. Nevertheless, as history brought to life through the eyes of one woman whose fortunes took her through two wars and tumultuous regime changes, this account is engrossing, especially as to the particulars of existence in a paranoid, post-revolutionary state with a bureaucratic machine as deadly as it is dysfunctional.

Although too long and overly slavish to the record, this multifaceted portrait rescues its heroine from undeserved obscurity.

SILENCE OF THE CHAGOS
by Shenaz Patel
Fiction

CAUGHT IN THE REVOLUTION
by Helen Rappaport
Fiction

LENIN ON THE TRAIN
by Catherine Merridale
Newsletter sign-up