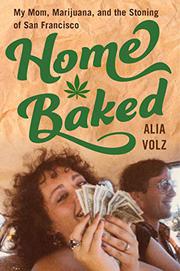 The unheralded story of San Francisco’s trailblazing “Brownie Lady” plays out across more than 20 tumultuous years of the city’s often tragic history.

Volz’s mother, Meridy, and father, Doug, may have been complicated people, attempting to build a family during chaotic times in the Bay Area, but they were especially well suited to create and dispense delicious baked goodies heavily laced with palliative marijuana. By simple virtue of her birth, the author became an “accomplice” in Sticky Fingers Brownies, the family business that at one time was cranking out more than 10,000 brownies per month. The experience of accompanying Meridy on perilous brownie runs throughout the city in the 1970s and ’80s, when growing a single marijuana plant was a felony offense in California, made Volz an eyewitness to an unprecedented revolution in American culture that continues to reverberate today. The author combines a journalist’s eye for detail with a storyteller’s sense of humanity to chronicle all the incredible highs and lows, both public and private. The dissolution of her parents’ relationship dovetails with San Francisco’s more public trauma, including the Jonestown Massacre, the assassination of Harvey Milk, and the outbreak of AIDS. “Faced with bureaucratic rigidity, people with AIDS broke the law to self-medicate with cannabis,” writes Volz. “Dealers became healers." Sticky Fingers may have started off as a goofy piece of psychedelia wrapped up in tight, little squares, but the business soon became indispensable in providing necessary relief for stricken young men who were inexplicably wasting away from a little-understood disease while still only in their 20s and 30s. The author’s firsthand depiction of AIDS and its devastating initial impact on San Francisco’s residents rings with epic tragedy. Thankfully, there are plenty of triumphs in the Sticky Fingers saga as well, and Volz herself embodies just one of them.

A sometimes-sad yet stirring love letter to San Francisco filled with profundity and pride.