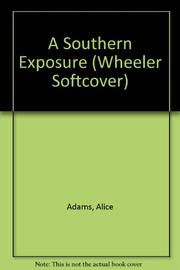 In this sprawling but amiable ninth novel, Adams (Almost Perfect, 1993, etc.) returns to the time (1930s) and place (North Carolina) of some of her earlier and, arguably, best writing, most memorable in short stories such as "Roses, Rhododendron" and "Verlie I Say Unto You." Harry and Cynthia Baird, along with their young daughter Abigail, move from New England to Pinehill, North Carolina, in the years just before the WW II. They've chosen Pinehill as a place to start over—leaving behind old flirtations and bad debts—because they sense that they'll seem exotic, even glamorous, to the small-town southerners and, alas, because Cynthia is secretly fascinated by Russell Byrd, a famous poet who lives outside of town. Once arrived, the Bairds are swept into a life that's both more complicated and sweeter than anything they'd expected. Deciphering the southerners, white and black, adulterous and faithful, poet and nymphomaniac, turns out to be an impossible and thoroughly irresistible occupation--so irresistible in fact that when it comes time for the Bairds to leave Pinehill they can't really tear themselves away. There are many detours to the plotline here, but, in all, Adams guides us deftly along. She's great at gossip, and she creates characters with all her usual flair (and overabundance of parentheses!). If some of the Pinehill people seem too archetypical to be true--one southern belle, one Jewish intellectual, one sullen black maid, etc.--others make up for it, especially moody, confused Russ Byrd, his poor wife Sally Jane, and, most of all, the Bairds, who surprise even themselves by turning out to be not nearly as shallow as they thought they were. Not a new recipe, but a nice mix of sugar and spite. Adams is at home here, finally, and it shows.