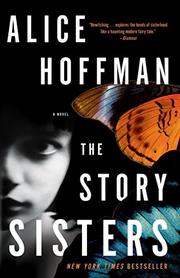 The summer Claire Story was 8 and her sister Elv was 11, a man tried to abduct Claire in his car; Elv jumped in, told Claire to jump out, and it was hours before she returned. They never told their mother Annie or middle sister Meg—their father walked out that same summer—and neither girl was ever the same. As the main narrative opens, when Elv is 15, she’s becoming an out-of-control adolescent increasingly at odds with careful, rule-following Meg. Racked with guilt over the unknown horrors her sister endured in her place, Claire tries to be loyal, but as Elv’s drug use and promiscuity escalate, she backs away. The desperate Annie finally takes Elv to a rehab facility, enlisting the reluctant support of her selfish ex-husband, who insists it’s all her fault. At the facility, Elv meets Lorry, a thief and addict who introduces her to heroin, but who also really loves her. The chronology speeds up after Elv comes home and a dreadful accident seals her alienation from her family. Hoffman paints wrenching scenes of tentative efforts at reconciliation that just barely fail, as Elv becomes pregnant and cleans up, but loses Lorry to his “fatal flaw.” A kindly detective brings late-life happiness to Annie and metes out delayed justice to Elv’s abuser, but the disasters keep coming. Two sisters grow into adulthood, dreadfully damaged by the losses they’ve endured and their punishing self-blame for the mistakes they made. Hoffman’s habitual allusions to mysterious supernatural forces are very jarring in this context, as is the endless interpolation of memories from the terrible abduction; she could have trusted her readers to get the point with out constant prodding. A radiant denouement shows love redeeming the surviving sisters, and there are beautiful moments throughout, but they don’t entirely compensate for Hoffman’s excesses of plot and tone.

A near-miss from this uneven but always compelling writer.

THE WORLD THAT WE KNEW
by Alice Hoffman
Fiction

THE RULES OF MAGIC
by Alice Hoffman
Fiction

THE MARRIAGE OF OPPOSITES
by Alice Hoffman
Fiction

THE MUSEUM OF EXTRAORDINARY THINGS
by Alice Hoffman
Nonfiction