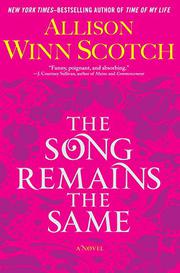 THE SONG REMAINS THE SAME

Young woman who survives a devastating plane crash with her body intact—and her memory wiped clean—struggles to piece together her complicated past.

Waking up in an Iowa hospital surrounded by beeping machines and people she does not know, Nell Slattery soon discovers she is a very lucky girl. She was found, along with hunky young actor Anderson Carroll, still strapped to her seat in a rural field where a passenger jet went down. She and Anderson were the only two to live. The daughter of the famous and reclusive painter Francis Slattery, Nell is told that she has a husband, Peter, and runs a Manhattan gallery with her pretty younger sister, Rory. She remembers nothing. It emerges that she and Peter were briefly separated after he had a one-nightstand with a co-worker, and she and Rory were not speaking before her fateful flight. Still, under the well-meaning ministrations of her new-agey mom, Nell returns to New York (and Peter) while ignoring the sinking feeling that she isn’t hearing the whole story. Back home she is dismayed to learn from various sources that she was previously a buttoned-up control freak with a wardrobe full of neutral colors. That is a far cry from the “fabulous” person she was hoping for. She was also a promising musician, who gave it all up after her father abandoned the family in her teens. Her father’s shadow looms large over Nell, and finding out more about him is part of the reason she allows a reality TV show to tell her story, against everyone’s better judgment. That makes sense, since it turns out that everyone in Nell’s inner circle has something to hide, and it is up to her to find the truth on her own. So she enlists Anderson, who has been self-medicating his post-crash PTSD with supermodels and booze, on a road trip to a small town that just might be the key to everything—if she can only remember where it is. Scotch (Time of My Life, 2009, etc.) crafts a plausible story, complete with a capable and prickly protagonist, that doesn't resort to any movie-of-the-week amnesia clichés.

A dry-eyed modern take on healing and forgiveness.

BETWEEN ME AND YOU
by Allison Winn Scotch
Fiction

THE ONE THAT I WANT
by Allison Winn Scotch
Fiction

THE DEPARTMENT OF LOST AND FOUND
by Allison Winn Scotch

THE USES OF ENCHANTMENT
by Heidi Julavits
Indie

UNDER LOCK AND KEY
by Robin Geesman
Fiction

THE OPPOSITE OF ME
by Sarah Pekkanen
Fiction