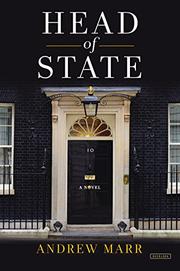 Now that the Scottish independence brouhaha has been settled, the question of the U.K.'s European Union membership is next on the agenda. Marr's (The Real Elizabeth, 2011, etc.) wickedly funny first novel, set in 2017, takes up the battle.

The prime minister sees the U.K.’s economic future tied to Europe. Opponents, opposition and ruling party alike, feel Britain must no longer be subject to overweaning continental bureaucracies. The prime minister—once "an intense, wiry-haired young politician" who became a "larger-than-life, principled yet unscrupulous figure" of notoriously "louche private behavior"—is opposed by his former Home Secretary, Olivia Kite, "red hair, pale face and vivid crimson lips" (picture Cate Blanchet as Elizabeth I with the heart of Cromwell). The battle’s followed by pols, pundits and once-grand newspapers where "wise old sacks of human indolence order the young and stupid about." Some characters are stock: reporter Lucien McBryde, an "an arrogant little sod" running on "marching powder"; and others are sociopathic: "that foul little splodge," Alois Haydn, regarded as the "notorious Svengali of Number 10." Marr flashes urbanely sardonic British humor (or humour)—"One of the great things about first-class air travel is that it puts all the crooks together"—and then explodes the narrative with an election-swaying death days prior to the vote. Enter Professional Logistical Services, a coven of former intelligence officers, military types and financial wizards, brought in to apply "advanced research techniques" to the crisis. Peripheral characters like the prime minister’s staff members; government functionaries; a Polish assassin; Myfanwy Davies-Jones, a novelist "with a cloud of yellow hair and a scarlet reputation"; and Lord Briskett, a noted historian from Oxford, "that crowded, clucking duckpond of vanity and ruffled feathers," run amok while Mr. Haydn traipses about London with a human head in a "Waitrose 'bag for life.' "

CREATURES WE DREAM OF KNOWING
by Andrew Marr
Indie

TOOLS FOR PEACE
by Andrew Marr

MIGHTIER THAN THE SWORD
by Jeffrey Archer
Fiction

WHAT IN GOD'S NAME
by Simon Rich
Fiction