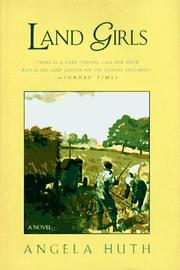  It's rural England during WW II and the air is heavy with cordite, sheep dung, and romance in this wonderfully wise, evocative, and moving seventh novel by British author Huth (Invitation to the Married Life, 1992, etc.). Prudence, Ag, and Stella arrive in Yorkshire in 1941 to work as ``land girls,'' young women trained by the government to replace the male farmhands who are off fighting for their country. These three, who've never met before, are assigned to the farm of John and Faith Lawrence, where they find themselves sharing an attic room and rising before daybreak to milk cows, muck out pigpens, and clean sheeps' rumps, among other tasks. As they become familiar with what farm life is really about, the girls also begin to learn some larger life lessons--from one another, from the example of their hardworking employees, and from Joe, the Lawrences' handsome only son who, unable to go off to fight because of his asthma, is home on the farm and engaged to Janet, a girl he plainly does not love. Huth has been compared, in the British press, to Jane Austen (no small compliment these days), and, indeed, she shares Austen's talent for setting up great romantic suspense and inventing lovably eccentric minor characters. But the war adds all kinds of unexpected twists to this story, making the course of true love follow a more circuitous route than even Austen could have plotted. Stella, Ag, and Prue bloom into distinctive, complex characters, and the question of their eventual happiness seems more pressing every day they spend on the farm. The answers, when they come, are both surprising and right. If the ending seems a bit of a letdown, with too many events and years compressed into too few paragraphs, it's only because we, like the land girls themselves, would have been content for those farm days to go on and on. Engaging, on all fronts.

WIVES OF THE FISHERMEN
by Angela Huth
Fiction

INVITATION TO THE MARRIED LIFE
by Angela Huth