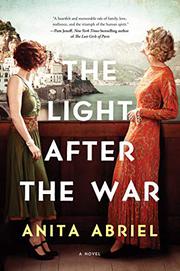 THE LIGHT AFTER THE WAR

Having escaped from a train headed to Auschwitz, Vera and Edith, two young Hungarian women, mourn their parents as well as Edith’s fiance, all likely lost to the Holocaust. Can they forge new lives in the postwar world?

After surviving the war by working on a farm, Vera and Edith realize their hometown of Budapest holds little promise. Fortuitously, a kind American officer sends them to Naples with a letter recommending Vera to the embassy. Once there, Vera, who is fluent in five languages, readily secures a job as secretary to Capt. Anton Wight, an American officer at the embassy. She’s intent upon taking care of Edith, who’s looking for male attention, which she finds with Marcus, a photographer ready to sweep her away dancing and maybe into social ruin. But it’s Vera who falls in love first, with the dashing Capt. Wight, who treats her to dinner dates and gifts. Although Vera tells Anton about her experiences during the war, including her guilt over surviving while her family presumably perished in the gas chambers, her attraction to him quickly outweighs any lingering trauma. However, Anton’s struggles with his own past derail their romance, plunging Vera into more heartache as her path traverses the globe. The romance between Vera and Capt. Wight is, unfortunately, much too easy, beginning with its inevitable whirlwind courtship. Publishing for the first time under her birth name, Abriel (Christmas in Vermont, 2019, etc., written as Anita Hughes) was inspired by her mother's life, and she deftly sketches the postwar world from Naples to Venezuela and Australia, with attention paid to the changed architectural and emotional landscapes. The rubble of bombed cities, the blank map of lost relatives, and the uncertainty of day-to-day survival outline the anguish of the lost generation.

A predictable romance tempers the energy of this tale about the healing powers of love.