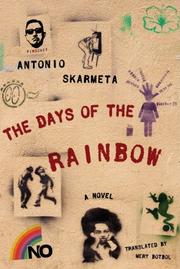 THE DAYS OF THE RAINBOW

The Chilean author (The Dancer and the Thief, 2008, etc.) uses two perspectives for this skimpy take on the twilight of the Pinochet dictatorship.

In 1973, Gen. Pinochet seized power in Chile and began a reign of terror. Fifteen years later, the population is cowed and apathetic; there are still 3,000 missing detainees. Make that 3,001, for the novel begins with the arrest of professor Santos, philosophy teacher at Santiago’s most prestigious high school. His son Nico and his classmates watch helplessly as he’s taken from the classroom. Meanwhile, Adrián Bettini, father of Nico’s girlfriend, Patricia, is summoned by Fernández, the Interior minister. Bettini has reason to be fearful; he has been blacklisted, jailed and tortured. Today will be different. Pinochet has decided to hold an above-board referendum with a simple question: Do you want him to stay in office? A “no” vote will lead to a multiparty election. (All this is historically accurate.) Fernández invites Bettini, once Chile’s best ad man, to head the “yes” ad campaign. Bettini declines; he will work for the “no” campaign that’s been granted 15 minutes on state-run television. Fifteen minutes against 15 years; it’s a challenge, just as it’s a challenge for Nico to find his father. Skármeta flips between the two stories as he struggles to decide whether to emphasize the continuing horrors of Pinochet’s rule or the glimmer of light of the “no” campaign. After Nico is shown the dead body of his beloved English teacher, a leftist, his throat cut, the author switches to the zany antics of the “no” campaign. Whether it’s the catchy jingle or the rainbow logo, the “no” campaign prevails, the citizenry rejoices, and Santos is freed after strings are pulled. For Nico and Patricia, it’s a triple: the end of virginity, of high school and of the dictatorship.

A flawed attempt to illuminate an extraordinary historical moment; the fumbling translation is no help.

THE DANCER AND THE THIEF
by Antonio Skármeta
Fiction

WATCH WHERE THE WOLF IS GOING
by Antonio Skármeta

THE FEAST OF THE GOAT
by Mario Vargas Llosa
Fiction

IN THE TIME OF THE BUTTERFLIES
by Julia Alvarez
Fiction