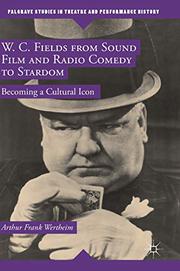 W.C. FIELDS FROM SOUND FILM AND RADIO COMEDY TO STARDOM

If his movie career had ended with his appearances in silent films between 1925 and 1928, W.C. Fields might only have been remembered as a second-tier talent. “I am at a stage where I cannot get an offer at all,” he wrote his wife after his first, not-too-memorable stint as a film actor. “I have been badly handled and am now out of the movies.” But after returning to Hollywood in 1931, Fields successfully made the transition to sound pictures, leaving an indelible mark on film comedy history with such classics as “It’s a Gift,” “The Bank Dick,” and “Never Give a Sucker an Even Break.” Wertheim (W.C. Fields From the Ziegfeld Follies and Broadway Stage to the Screen, 2016, etc.) colorfully and comprehensively captures Fields’ journey from “sacrificial lamb thrust aside” by Hollywood to “American cultural icon” in this final volume of a biographical trilogy. Fields was a “virtuoso comedian…who brought so much laughter to millions while enduring so much anguish,” he writes. The book makes effective use of a newly available archive of Fields’ papers to add texture to its portrait of a man whose life has already been the subject of numerous studies. “I stunk so badly the police came in [the theater] with the impression that someone had been throwing stink bombs around,” Fields wrote of one of his performances. Wertheim focuses mainly on the work, not only showing how Fields used his vaudeville background and vocal gifts to fashion his unique comic routines and persona, but also how iconoclastic many of his films were. “Instead of idealizing the sacrosanct family dining table as a place of tranquility, Fields lampoons it as a place of domestic turmoil,” he observes of “The Bank Dick.” But as the author also vividly shows, Fields’ comic genius cannot be separated from his inner turmoil, which manifested itself in his legendary drinking, his failed relationships with women, and a cantankerous disposition that prompted one director to call him “the most obstinate, ornery son of a bitch I ever tried to work with.” As with so many artists, fame could only go so far to fill the “voids in his life.”

A thorough, insightful study not only of Fields’ film comedies, but of the inner turmoil that fueled his genius.