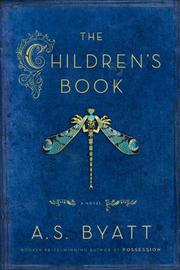 Byatt (A Whistling Woman, 2002, etc.) encompasses the paradigm shift from Victorian to modern England in a sweeping tale of four families.

The deeper subject, however, is the complex, not always benign bond that attaches children to adults. As the novel opens in 1895, Olive Wellwood seems the model New Woman: popular author of books that reinvent fairy tales for contemporary children, tolerant wife to Fabian Society stalwart Humphry, devoted mother pregnant with her seventh baby. She takes in Philip Warren, a working-class boy who longs to make art, and connects him with Benedict Fludd, a master potter whose family belongs to the Wellwoods’ progressive, artistic circle. As the long, dense narrative unfolds, we see the dark side of these idealists’ lives. Three of the children Olive is raising are not hers with Humphry; in another household, magnificent works of art reveal repellent acts of incest. The gothic sexual interconnections recall Bloomsbury, and Olive is clearly a gloss on E. Nesbit, but this is no mere roman à clef. Byatt’s concern is the vast area where utopian visions collide with human nature. Her adult subjects, she writes, “saw, in a way that earlier generations had not, that children were people, with identities and desires and intelligences…But they saw this, so many of them, out of a desire of their own for perpetual childhood.” World War I forces everyone to grow up. Only one son of this socialist set becomes a conscientious objector; the others serve and most of them die. The pace, positively stately in the novel’s first half, speeds up and becomes unduly hasty in the final section. But Byatt has painted her large cast of characters so richly that we care about all of them even when their fates are summarized in a sentence. In the last chapter, the variously battered survivors reunite and dream once more: “They could make magical plays for a new generation of children.”

Ambitious, accomplished and intelligent in the author’s vintage manner.

ON HISTORIES AND STORIES
by A.S. Byatt
Fiction

THE BIOGRAPHER’S TALE
by A.S. Byatt

SOPHIE AND THE SIBYL
by Patricia Duncker
Fiction

THE DUST THAT FALLS FROM DREAMS
by Louis de Bernières
Fiction