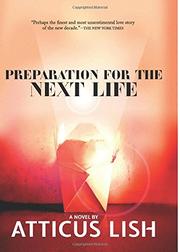 PREPARATION FOR THE NEXT LIFE

Lish (Life Is With People, 2012) makes his fiction debut with a love story set in the sewers of the American dream.

Undocumented immigrant Zou Lei lands in the U.S. and enters a wrestling match with her new country, trying to hold a job and evade deportation. Meanwhile, a scarred (physically and emotionally) veteran named Skinner struggles with nightmares of war in a nation that claims to support his service but doesn’t know where he fits now. When these two people meet each other in a dingy stairwell, there’s an instant connection—a palpable sense of need. Together, they negotiate the streets of a tough city in an even tougher country that, perhaps, doesn’t care about them at all. Lish’s novel is angry but compassionate; he sees his characters clearly without romanticizing them or their impoverished experiences. His version of New York is garish, the accumulation of detail—the scum of forgotten food courts, people streaming from subways—becoming surreal. The prose feels in constant motion, and without quotation marks around any of the dialogue, the reader strains to hear the characters above the din. Nevertheless, Lish often avoids gloominess; there’s a velocity to his writing and moments of mundane, fleeting beauty, as when a cellphone "lit up indigo in [Zou Lei’s] hands for several moments shining through her fingers.” The book feels, perhaps, a little too long, a little too overwhelming—in ways both intentional and not—but it also shows the scary truth about who’s allowed to prosper in this country, ultimately making clear the irony underlying one of the novel’s early descriptions of the U.S.: “You don’t have to be rich. If somebody wants it, it will be theirs.”

A sledgehammer to the American dream.

THE BOOK OF UNKNOWN AMERICANS
by Cristina Henríquez
Fiction