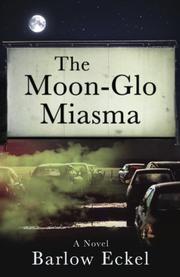 Eckel’s debut novel offers a 63-year-old man’s remembrance of a high school relationship, told with the wisdom of experience.

After 35 years away, Coop Berkoff returns to his hometown of Spartans Ridge, Georgia, for a high school reunion. The reunion involves multiple past classes, so it’s emotionally fraught for Coop, as he’ll be seeing his lost love, Cynthia Weaver, for the first time in decades. He was once a precocious and joyful young man, but when he met Cynthia in his senior year, his life took a turn. She was slightly younger than he was, and she immediately captivated him; he professed his feelings at the Moon-Glo drive-in theater—a decision that changed his life. Despite their strong feelings for each other, jealousy and uncertainty plagued their relationship. Cynthia needed to be reassured of Coop’s—or any man’s—goodness, and, later, Coop found himself desperately wanting her approval. When he went off to college, the combination of distance and jealousy became poisonous, and Coop became misanthropic and even violent toward others as he struggled with his own depression and malaise. The characters’ turbulent history offers not only a story of romance but, eventually, one of understanding, acceptance, and moving on. Readers may find that the tone of the prose seems detached at times, but this distance is actually one of the novel’s greatest strengths. The emotions of the characters run high throughout the story, but it’s told from a point of view of recollection decades later, and the nigh-clinical precision with which the author describes events allows readers to have greater sympathy and understanding than closer narration might have achieved. The result is a complex, character-driven study dealing with depression, love, and the stubborn refusal to give up the fight.

An illuminating, if sometimes-painful, dissection of a relationship.

THIS IS HOW YOU LOSE HER
by Junot Díaz
Indie

WISH YOU WERE HERE
by Stewart O’Nan
Newsletter sign-up