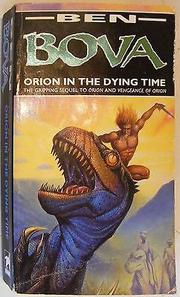 ORION IN THE DYING TIME

Third in the series following Orion and Vengeance of Orion (neither seen), Bova's ongoing cosmic battle between good and evil. Immortal android Orion was made by the good-guy Creators (pure-energy beings who take the form of Olympian gods and goddesses in their dealings with humanity) to battle the various evil super-beings intent on wiping out both the Creators and humanity. This time out, Orion, with dazzling companion Anya (the goddess Artemis--she's fallen in love with Orion), finds himself back in the neolithic era, where the Sahara is covered with lush grass and nearby stands the idyllic forest of Paradise. Here the creel reptilian-alien Set (he doesn't resemble the Egyptian god at all) has taken up residence while he works on his vast plan, involving time travel, dinosaurs, a planetary core tap, and what, all, to destroy the Creators. After various battles, captures, reversals, escapes, tortures, betrayals, and other high jinks, Orion will come into godlike power of his own, transport Genghiz Khan's armies to the neolithic to fight Set's saurian minions, explode Set's home planet, and earn the grudging respect of at least some of the disdainful Creators. Brainless and often absurd, and, with lots of gore and monsters and gee-whiz folderol, clearly aimed at the more juvenile section of the audience. A disappointment after recent, more thoughtful outings like Cyberbooks and Voyagers III.
Pub Date: Oct. 1st, 1990
ISBN: 0749305827
Page count: 356pp
Publisher: Tor
Review Posted Online: March 20th, 2012
Kirkus Reviews Issue: Sept. 15th, 1990