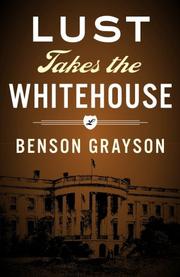 A callous mogul tries his hand at politics and uses his undue influence to get a former governor elected president, only to regret his support and redirect his resources to ousting the same man.

Melvin Shultz runs Lust Cosmetics, a billion-dollar company. Unsatisfied in the private sector, Shultz decides “on a whim” to commit all his time and money into backing long-shot candidate Robert “Buck” Porter for president of the United States. Whereas controversially provocative ads succeeded in promoting Lust Cosmetics, Shultz turns Porter into a contender via the standard shallow campaign of false promises. Once Porter is in office, however, Shultz realizes he’s made a considerable mistake in electing the contemptible former governor. After being appointed CIA director by Porter, Shultz tries to contain and dismantle the president’s ineptitude, which threatens to drive the country into the ground. Grayson (My Troubles with Time, 2011, etc.) ably establishes Shultz as a cold, detached power broker but also as a man who inspires confidence by the impressive ambition and cunning in his often despicable scheming. True to form, realpolitik is a constant battle—even after the successful presidential campaign, Shultz necessarily employs the same hardball tactics in his fight for the CIA directorship and, ultimately, in the campaign to bring down President Porter. In contrast to the playfulness suggested by its title, the novel has a frank tone and a clear style that feels comfortably old-fashioned. Shultz, for instance, may be an assertive personality, but he steers clear of hard liquor, drives an old, dilapidated Buick and has a nine o’clock bedtime. He’s a loyal husband, though even he must tire of his wife’s incessant grumbling.

A solid story of political warfare made doubly compelling by the dubious hero leading the charge.

I2
by James Bannon
Indie