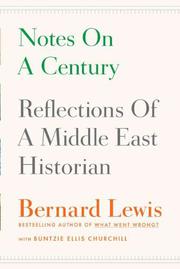 NOTES ON A CENTURY

One of the first Orientalists in Britain shares his long historical trajectory, from London to the Middle East to Princeton.

Lewis (Eastern Studies Emeritus/Princeton Univ.; The End of Modern History in the Middle East, 2011, etc.) was born in 1916 and is still astoundingly prolific and relevant, as demonstrated in recent bestsellers What Went Wrong? (2002) and The Crisis of Islam (2004). In episodic, wittily composed chapters, he addresses salient events in his career as a historian of the Near and Middle East—e.g., the process of learning numerous difficult languages and formative influences such as being born a nonreligious Jew in London. Enamored early on with exotic languages, he taught himself Italian and Hebrew, then at the University of London (his father wouldn’t let his only child go to Oxford because “it was just a place where students spent all their time drinking and partying”) he entered the relatively untried field of Oriental Studies and tackled Arabic. In this prewar era, his teachers followed a philological, textual approach, rather than historical. When he chose “the Eastern Question” in terms of the Ottoman Empire, he was encouraged to study the British, French, German and Russian documents, but not the Turkish. After the war, which Lewis spent with British intelligence doing decoding and translating work, he headed for Istanbul, determined to delve into the Ottoman archives, and emerged with an important early work, The Emergence of Modern Turkey (1961). In a lifelong pursuit of an unbiased and accurate historical method, he has often served as a kind of cultural diplomat, lecturing in America and translating for dignitaries, and he urges the guarding of one’s “scholarly impartiality” and against prejudice. He writes frankly of his long tenure at Princeton, the dicey Israel-Palestinian crisis, the eclipse of secularism in the Muslim world and the “dangerous trend…of intellectual protectionism” advocated by Edward Said et al.

Thoughtful, outspoken words from a sage who has lived his share of history.

THE CRISIS OF ISLAM
by Bernard Lewis
Nonfiction

THE MULTIPLE IDENTITIES OF THE MIDDLE EAST
by Bernard Lewis
Nonfiction

ISLAM AND THE WEST
by Bernard Lewis
Nonfiction

THE MUSLIM DISCOVERY OF EUROPE
by Bernard Lewis

HISTORY IN THE MAKING
by J.H. Elliott
Nonfiction