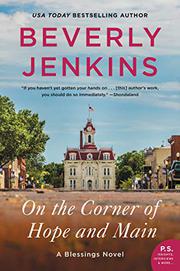 ON THE CORNER OF HOPE AND MAIN

The residents of Henry Adams, Kansas, prepare to elect a new mayor.

Town matriarch Bernadine Brown is dealing with problems both personal and professional. Bernadine is struggling to move forward with her lover, Malachi July, after a terrible betrayal, and she sees how the upcoming mayoral election is causing fractures and fault lines in families throughout Henry Adams. The 10th installment of Jenkins' (Rebel, 2019, etc.) Blessings series is filled to the brim with characters and subplots, and if it starts off with perhaps too much exposition about events from past books, the people are still compelling. Women prioritizing their own feelings and needs in order to forgive and move forward is the thematic and emotional core of the book. Of particular note is the focus on longtime married couple Sheila and Barrett Payne. Sheila is still reeling from the devastating discovery of her husband’s infidelity despite her years of unwavering support for his military career. Barrett announces his plans to run for mayor and expects Sheila’s support, but Sheila has her own plans to run for mayor. Like most of the candidates, Sheila lacks political experience, but she presents a well-researched platform that will benefit all the town's citizens. When Barrett tells her that she “[doesn’t] know the first thing about running a town,” Sheila stands up for herself and her dreams. As the election continues, Bernadine’s ex-husband, Leo, appears in town, hoping to gain revenge for perceived slights in the past. Although the multiple long-running plotlines and extensive backstories might prove to be an impediment to new readers, this is still a charming installment full of warm, interesting characters. The small-town drama is intense, but Jenkins merrily moves the plot forward, always rewarding good people and punishing wrongdoers.

For longtime fans who are looking forward to catching up with beloved characters.

CHASING DOWN A DREAM
by Beverly Jenkins
Fiction

STEPPING TO A NEW DAY
by Beverly Jenkins
Newsletter sign-up