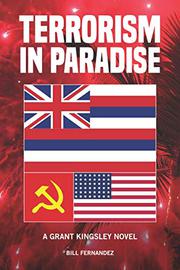 A historical novel focuses on murder and turmoil in 1920s Hawaii.

Grant Kingsley is the son of a sugar plantation owner in Honolulu. At the outset of the narrative, Grant; his brother, David; and their father, James, are set to meet with the Hawaii Sugar Planters Association. It is 1924, and labor relations in the sugar industry are not exactly amicable. A recent strike ended with deadly force, and things show few signs of improving. The planters insist they need to keep wages low for their product to compete on the international market, but the laborers demand better wages. The HSPA feels that the Kingsleys are too soft on their workers. Before discussions can progress, the unthinkable happens: An explosion occurs and James is killed. Who would perpetrate such an act? The HSPA believes that some disgruntled Japanese workers are to blame (“Japanese dynamiters are the culprits,” one man insists), but Grant feels otherwise. Grant, an attorney, decides to investigate. He helps his detective friend Chang Asing track down the killer. Many different ethnic groups—native Hawaiians, the Japanese, and Filipinos—have a reason to be upset with the HSPA, but would any of them resort to murder? It turns out the assassin is a communist named Miguel from the Philippines who has received KGB training. Will Grant and Asing be able to pick through all the thorny relations in Hawaii to stop Miguel before he strikes again?

The main problem with Fernandez’s (Splintered Paddle, 2019, etc.) novel is that there is not much to unravel about who murdered James. Sure, Grant and the other characters do not know the killer or why he would resort to such means, yet readers do. Likewise, Miguel’s motivations are clear from the outset. As Grant and Asing collect clues, there is not as much tension as one might anticipate from a plot based on catching an assassin. The book’s excitement stems instead from the many facets of Hawaii’s past that play, in some way or another, into the bigger story. Many readers may not know much about the uneasy melting pot that was Hawaii at the time, and so, for those unfamiliar with, say, the 5-5-3 Treaty of 1922, there is certainly much to learn. From Hawaii’s past as a place ruled by royalty to the many ways the wealthy sugar planters attempted to manipulate their workers, the historical tidbits are weaved into the tale in entertaining ways. Even the history of the ukulele (which Asing plays well) makes an appearance in the narrative. Then there is the complex story of Miguel. How exactly does one become a devout, murderous communist in early-20th-century Philippines? Miguel may not be the most sophisticated villain (for instance, he declares matter-of-factly: “I cannot wait forever to have my vengeance against the killers of Filipinos”) yet his presence helps shed light on international relations at the time. After all, if a communist revolution could happen in a place as vast as Russia, who could stop it in a collection of islands like Hawaii, especially with so much conflict between classes?

While it sometimes lacks tension, this terrorism tale expertly draws on portions of Hawaii’s history.

GODS, GHOSTS, AND KAHUNA ON KAUAI
by Bill Fernandez
Indie

Hawai'i in War and Peace
by Bill Fernandez
Newsletter sign-up