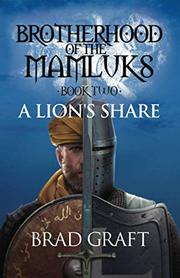 From the "Brotherhood of the Mamluks" series, volume 2
by Brad Graft
BUY NOW FROM
AMAZON
BARNES & NOBLE
LOCAL BOOKSELLER
GET WEEKLY BOOK RECOMMENDATIONS:

This second installment of a historical fiction series focuses on 13th-century Muslim warriors.

The year is 1249, and a man named Leander is a soldier in Egypt. Leander and his comrades are Mamluks: highly trained fighters typically of Kipchak descent who are usually sold as slaves. But Leander is different. He hails from France and once served as a translator for Walter IV of Brienne. He is as skilled with language as he is with weapons. He decided to defect to the enemy just before the decisive fighting in La Forbie in 1244, and, as luck would have it, he chose the winning side. When the story begins, Leander is preparing to fight against the very Crusaders he once assisted. King Louis IX of France plans to attack Egypt. The Egyptians, though, are ready. And while the Crusaders will largely prove to be less-than-formidable foes (ultimately debilitated by disease and their own lack of organization), the Egyptians have plenty of other things to worry about. Graft’s (Chains of Nobility, 2018) narrative follows Leander and Ox and Cenk, two fellow Mamluks, as they do their best to survive in a brutal world of warfare and political double-crosses. It may take readers several pages to fully understand Leander’s background. But once the Crusaders begin landing in Egypt, the madness of the age becomes apparent. From a knight’s sinking into the ocean in his own armor to a number of decapitations, the violence is never glamorous. At one point, Leander is instructed to kill any Crusaders weakened by disease (“Their thin arms held out in defense are now just limbs to be hewn off the trunk”). Although the action is engrossing, several flashbacks concerning the main characters are not as edifying. For instance, readers are told matter-of-factly over a few pages how Cenk is a top military instructor. He is “seen as a living legend,” though this information pales in excitement to the more immediate threats from warriors with swords and arrows. Yet in the end, a time of nearly unthinkable conflict is vividly brought to life.

While backstories can be dense, this Muslim war tale delivers gripping action scenes.